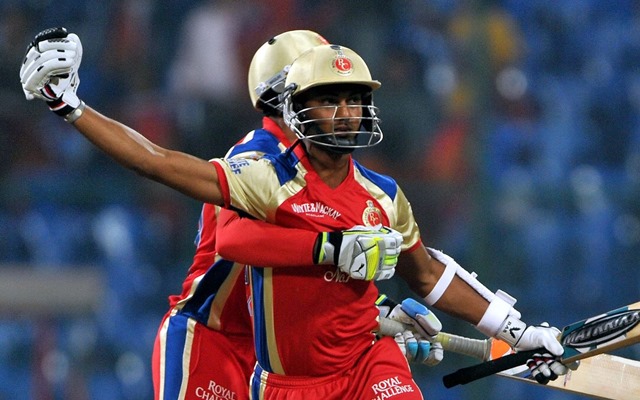 Back in 2011, Chinnaswamy Stadium in Bangalore witnessed one of the most interesting T20 matches of all time. Royal Challengers Bangalore was playing South Australia Redbacks in the Champions League. Having been set a target of 215 to win, RCB had their back against the wall, when they needed 13 runs from just four balls.

Arun Karthik was batting with Sreenath Arvind, who helped to reduce the target to six runs from one ball. Karthik hit the last ball off Daniel Christian’s over for a six as RCB produced an unbelievable win. The win helped the Bangalore franchise to qualify for the semi-final of the tournament.

Years after that match, Karthik spoke about the famous match. Recalling that match, he said that he was not supposed to play that match. AB de Villiers was the keeper for the season and would have kept wickets even in that match if not for a freak injury. He revealed the injury ruled ABD out of the match. The wicketkeeper shared the story that the fellow South African star said that he believed Karthik will win the match for the team.

“I was not supposed to play that match. The day before the match we had a fielding session and AB de Villiers fractured his finger during the session. He had to leave to South Africa, he told me that I will play and win the match for the team,” said Arun Karthik in an exclusive chat with Sportskeeda.

Talking about that famous match, Karthik also revealed that he received a text message from ABD after the match. The Puducherry player said he was surprised to have received that from the South African.

Karthik also said that Arvind’s batting helped them to get to that stage. He described the entire partnership between him and Arvind.

“I know Aravind’s batting, I had seen him bat for Karnataka, he was always a contributor. I had seen him play in local tournaments here in Chennai. I knew that he could do it. He got a boundary off the first ball, a two off the next ball and we ran a bye. Everything just happened at the moment and for the last ball, it all worked out. It’s definitely a very memorable match,” the former RCB star added.

RCB went on to win the semi-finals against New South Wales Blues, chasing another big total. However, the IPL 2011 runners-up weren’t lucky enough to win the trophy. They were defeated by Mumbai Indians in the final in Chennai.

Shane Watson reveals where BBL has lost its way when compared to ...