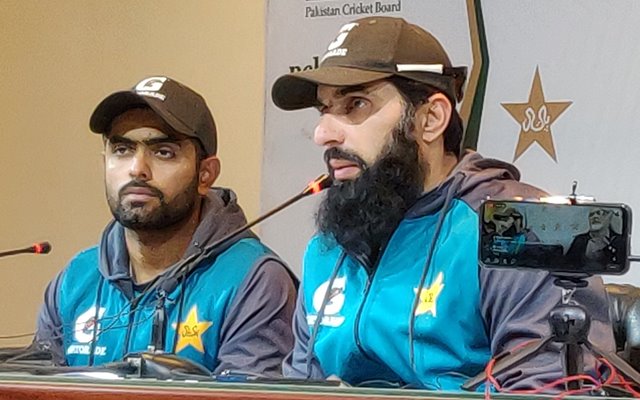 Babar Azam is very close to being in the same league as Steve Smith or Virat Kohli : Misbah-ul-Haq

Babar Azam, the talented batsman from Pakistan has received lots of praise from the cricketing fraternity and fans for his consistent run with the bat. He has done exceptionally well in the last couple of years across all the formats. It can be said that Pakistan, the country which is known to produce fast bowlers, has given a world-class batsman after a long time.

Pakistan’s head coach Misbah-ul-Haq also believes that Babar is not very far from getting into the category of Virat Kohli and Steve Smith. Currently, the superstar duo is rated as the best batsmen in modern-day cricket. And, it is a fact that they have seriously raised the bars for the upcoming generation. In fact, there are very few who can match Kohli and Smith’s consistency.

Alongside these two players, even Babar Azam’s name is being taken since his international debut thanks to his impeccable batting skills. Misbah-ul-Haq doesn’t believe much in comparisons but he reckons that Pakistan limited-overs skipper is very close to becoming a world-class batsman. However, he also recited the fact that the 25-year-old believes in a work ethic of working extremely hard to match the likes of Kohli and Smith.

“I don’t like comparisons but Babar is currently very close to being in the same class as Virat Kohli, Steve Smith or Joe Root. He believes in the work ethic that if you want to better Kohli you have to work harder than him at your skills, fitness and game awareness. All of us agree that he has done a very good job and his biggest plus is that being among the worlds top players he leads by example.” Misbah-ul-Haq said in an interview to Youtube channel, Cricket Baaz.

The 45-year-old further lavished praise on Babar Azam stating that he is a matured player now and likes to face challenges. Misbah-ul-Haq also cleared that he doesn’t play for money and doesn’t want to be in the team just for the sake of it and Babar always wants to perform well for his country.

“He is in a zone of his own. He just doesn’t want to be in the team. He just doesn’t want to play for money. He wants to be the top performer for Pakistan. He is always pitting himself against other top batsmen like Kohli or Smith. He loves challenges in the nets and on the field. He has really matured as a player and in time he will get better as a captain with experience,” Misbah added.

BCCI and ICC get involved in a heated exchange of emails over ...

Anindya Dutta picks greatest ever Indian Spineers at home and away