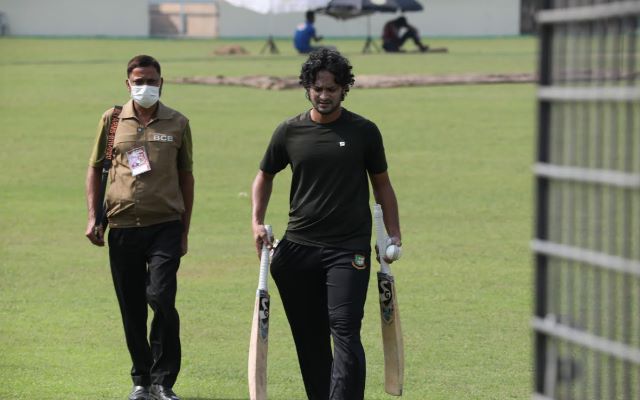 This whole matter was further increased when one person named Mohsin Talukdar Sylhet in Bangladesh came live on Facebook from the Talukdarpara area of ​​Shahpur under Sadar Upazila and abused the cricketer for hurting religious sentiments.

The man was sporting a sharp weapon and he threatened Shakib with some serious death. He even vowed to kill the 33-year-old from Sylhet to Dhaka. However, Mohsin later released another video in which he apologized for threatening and tried to escape from his home.

Meanwhile, on Wednesday 18 November, the elite anti-crime Rapid Action Battalion (RAB) team and the police of southeastern Sunamganj district arrested Mohsin from Ronoshi village around 11:15 am.

Although the accused has been put behind bars, the Bangladesh Cricket Board (BCB) star does not want to take any chances with the security of the all-rounder. Thus, the board has appointed an armed guard for Shakib, who will be with him at all times.

The BCB appointed an armed guard to protect Shakib after the all-rounder received death threats on social media. pic.twitter.com/6yjHENDa4B

After facing backlash on social media for participating in the Hindu program, Shakib went live on YouTube and apologized for hurting the sentiments of Muslims. In his statement, the all-rounder clarified that he was not the chief guest at the event and brought Diya to light as one of the organizers and Paresh Da requested him for it.

He also stated that he did not inaugurate the event as it was done by Firhad Hakim. Also, Shakib stated that he is a proud Muslim and always tries to follow his religion properly.

“The second issue I want to speak about is sensitive. I want to start by saying that I am a proud Muslim and try to follow the religion properly. Mistakes will happen and that is part of life. If I have made a mistake, I apologize and if I have hurt your feelings, I apologize. “

“While I was leaving, Paresh Da requested me to light a lamp. The media requested me to stand for a picture. I stood in the pandal for two minutes. Kali Puja was inaugurated before the arrival of Farhad Hakim, ”Shakib said.

If Rohit Sharma performs well in Australia, there should be a debate ...