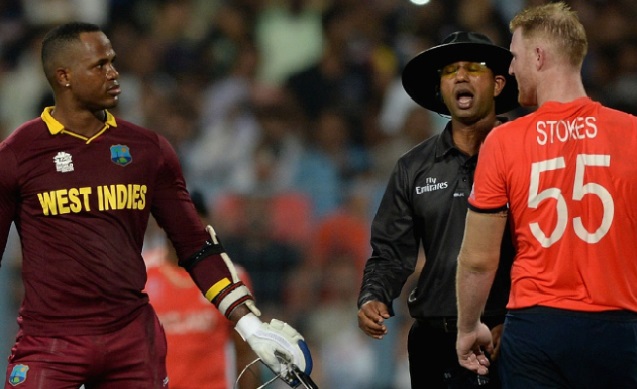 The two players have engaged in a fierce war of words when the West Indies and England were playing a Test match in early 2014.

After this, Samuels had spoken about the incident and also created a fuss about it. The feud between the two players even went to an extend when Ben Stokes wrote in his book that he doesn’t like Samuels at all.

During Sky Sports’ Cricket Watch along, former West Indian captain Darren Sammy and Joe Root had joined in. The episode was based upon the ICC Men’s T20 World Cup final of 2016.

The match which West Indies won when Carlos Brathwaite hit four sixes off the four of Ben Stokes’ last over to win the match. Samuels had even called the English all-rounder “nervous laddie” after the match, which didn’t go down well with Stokes.

Marlon Samuels might have made up the story : Joe Root

Sammy revealed that Samuels was pumped after Stokes had said something to him during that final.

Samuels went on to play a match-winning knock of 85 to help his side WI lift their second T20 World Cup.

“Marlon told us something, and maybe [Joe] Root could confirm that when Marlon came in at 11-3, [Stokes] came to bowl and he said something like ‘you guys, I would like to see you come out of this one’ and Marlon was just taking his time, making sure. That comment, whatever [Stokes] said to him as he walked in, that got him really focussed,” Sammy said.

Joe Root, who was watching along, said that Samuels’ story could have been fabricated one. “It would have been a good effort because Ben was at long-on, so I don’t know how that happened. He might have just made it up,” Joe Root said

To this Sammy responded and kept his stand on the Samuels’ story. He also recounted that Samuels had said something to Stokes after the match ended.

“When Stokes was bowling an over to him and he said something to Marlon during that time. Because Marlon told us about it. He was really pumped after that. If you notice, in the back end, Marlon said something to him after that. But it’s all cricket man,anything can happen” responded Sammy.