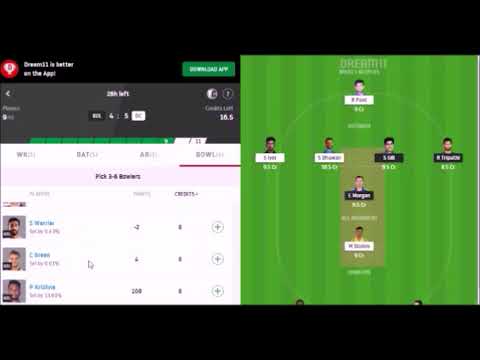 #ipl2020 #dcteam #kkrteam
KKR Vs DC 100% Wining Team for Dream 11 | IPL 2020 Match 42 | KKR Vs DC Predicted XI
Welcome to my YouTube Channel Ritesh Badjate
KKR VS DC MATCH PREDICTION & ANALYSIS
Kolkata Knight Riders, is in some trouble. It lost its most recent match against RCB in a devastating fashion and now faces the strong Delhi Capitals. Injury concerns have also weakened the KKR lineup considerably.
DC also lost its recent match and has questions to be answered about its team balance. It is in the race to try and finish in the top-2, a huge advantage in the IPL, and so will not take anything lightly either.
KKR vs DC IPL 2020 is going to be played at the Sheikh Zayed Stadium, Abu Dhabi on the 24th of October 2020.
TEAM PREVIEWS
KOLKATA KNIGHT RIDERS
What positives can you take out from a match in which you were bowled out for 84 and then ended up losing in the 14th over? Not many. The best thing that KKR can do is to forget that match and look to start fresh. Learn from the mistakes, yes, but do not ponder over them.
As it stands, KKR is still in the best position to lock up the fourth place.
It is not going to be easy, however.
KKR is likely to be without Andre Russell who picked up a minor injury. Sunil Narine could make a comeback after being cleared by the IPL but how that affects his bowling remains to be seen. Changing the team also means reshuffling the balance of the team once more and that is not something that KKR wants.
Its batting is a big concern. Shubman Gill has been sedate at the top of the order and seems to be under pressure to be more aggressive. Rahul Tripathi has looked out of his depth against genuine pace, something he will come up against DC.
Nitish Rana has been a shadow of his best self this season and the senior pair of Dinesh Karthik and Eoin Morgan have not set the IPL alight either. KKR is struggling with its batting and is going to go up against the best bowling attack of IPL 2020 in the next match.
The bowling for KKR has got a boost after adding Lockie Ferguson to the playing eleven. However, he has been a lone warrior for the team in their recent two matches. Pat Cummins seems to be struggling to pick wickets, Prasidh Krishna has been pedestrian, and Kuldeep Yadav is short of confidence.
We like Varun Chakravarthy but he is not someone that is going to run through sides.
Kolkata Knight Riders Playing 11
DELHI CAPITALS
DC is at the top of the table standings at the time of writing this article but it has some problems to take care of as well. Shikhar Dhawan became the first-ever player to score two consecutive centuries in the IPL but his second inning did not result in a win.
In fact, even the win prior to that required Axar Patel to come in and score 18 runs off the last over.
DC’s batting has been misfiring for some time now and it is a concern. Dhawan’s brilliant form has covered up the poor returns from Prithvi Shaw, Shreyas Iyer, and Rishabh Pant. It is only a matter of time before Dhawan fails in one of the matches and that could test DC out like never before.
Prithvi Shaw is going to be under pressure to keep his place with a player Ajinkya Rahane on the bench. Every single batsman apart from Shikhar Dhawan needs to step up.
Perhaps playing in Abu Dhabi, a venue where the fast bowlers have got some help, will help them since they all like the ball coming on to the bat.
Marcus Stoinis, Shimron Hetmyer, and Axar Patel give DC a lot of power in the middle-order. This is an area that DC has an advantage over KKR, especially if Russell continues to miss out.
The real advantage for DC is its bowling. We expect a full-strength bowling lineup with Rabada, Nortje, Axar, and Ashwin in there. The fifth bowler could see a change and we think Harshal Patel may make a comeback in place of Tushar Deshpande.
The conditions in Abu Dhabi have been helpful for the fast bowlers and we think DC will enjoy these conditions much more than KKR.
Delhi Capitals Playing 11
KKR VS DC TOSS PREDICTION
We think the team that wins the toss is going to want to bat first. The conditions in Abu Dhabi were not as bowler-friendly as KKR made it seem in their previous match. The bowlers will be in the game for the duration of the match and having a good total on the board may be a significant advantage.
PITCH AND CONDITIONS
Abu Dhabi has been one of the best venues in IPL 2020. It offers some bounce and pace to the players that allow an even contest between the bat and ball. The fast-bowlers can use the conditions to their advantage while the batsmen can score freely too if they get their eye in.
Interestingly, DC has lost the two matches it has played in Abu Dhabi so far while KKR has won four out of the seven it has played here. Perhaps more relevant is the fact that KKR has lost two out of its most recent three matches here and only won the remaining one in a Super Over contest.
A score of around 170 should be seen as par batting first.