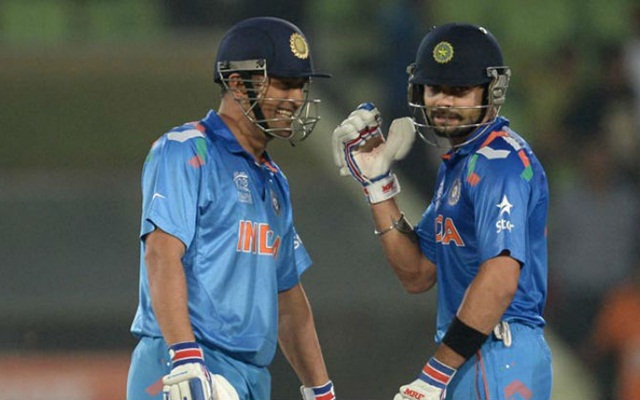 Dean Jones, the former Australian cricketer, reckons that the Aussies don’t prefer to sledge batsmen of the calibre of Virat Kohli and MS Dhoni. The veteran feels that trying to get under their skins can backfire severely and ‘confrontation’ is something they like. Even as Dhoni prefers to stay calm, Virat is vocal and never shies away from expressing his feelings on the field of play.

During India’s tour of Australia in 2018-19, the hosts’players didn’t try to agitate Virat, who was a tad aggressive in his approach. As per the 59-year-old Jones, who played 52 Tests and 164 ODIs for the national team, Australia curbed their instincts even against the likes of West Indies’ Sir Vivian Richards and New Zealand’s Late Martin Crowe.

“I’ll tell you the reason why they went quiet on Virat. Because we went quiet when Viv Richards came out to bat. We went quiet on Javed Miandad, on Martin Crowe. And there is a reason behind that — You don’t upset the bear, you don’t upset Virat Kohli or MS Dhoni because this is what they like – a confrontation,” Jones was quoted as saying on Sportscreen’s YouTube page.

Earlier, this year, Michael Clarke, the 2015 World Cup-winning captain, said that Australia didn’t sledge Virat because their players were worried about contracts in the Indian Premier League (IPL). However, Jones thinks that the comments defy logic

The Victoria-born Jones said that since an IPL contract depends upon the coaching staff and the team managers, and hence, sledging Virat has no role to play in it.

“Don’t give them any oxygen. But I find this reason about not upsetting Virat because of IPL contracts a bit rubbish. Is Virat going to stop anyone from playing? That is down to the coaches and managers,” he added.

A number of Aussie players take part in the IPL. David Warner, the skipper of the Sunrisers Hyderabad (SRH), is the leading run-scorers among the foreign players. He also won the team the title back in 2016.

Pat Cummins fetched a stunning INR 15.5 crores from the Kolkata Knight Riders (KKR) for the 2020 edition of the mega event. The likes of Glenn Maxwell, Kane Richardson and Aaron Finch also managed to secure lucrative contracts.