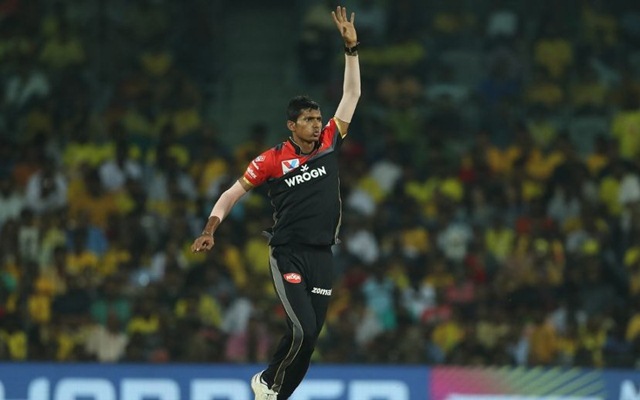 Since the inception of the Indian Premier League, the tournament has given birth to many starlets. Many young prospects have dazzled and made their presence felt on the global level by performing in the cash-rich league. Several players have also paved their way into the national side by delivering impressive performances in the league.

One such star is Royal Challengers Bangalore pacer Navdeep Saini, who impressed everyone with his sheer pace in the previous season. He represented the Virat Kohli-led side in 13 matches and scalped 11 wickets including best figures of 2/24. The speedster recently revealed an incident when he managed to amaze West Indies all-rounder and KKR player Andre Russell with his lethal pace.

In conversation with India Today, Saini recalled the game in Kolkata when the Russell heaped praise on Saini’s pace and even told RCB skipper Kohli about it.

“There was a match in Kolkata between RCB and Knight Riders when I had bowled to Russell. I had bowled really well. After that Russell told Virat paaji: “Dikhne mein to patla sa ladka hai par ladka daalta bahut tez hai (He looks thin but the lad bowls very fast)”. When Virat paaji told me later I was quite happy. When a foreign player talks about you in this way, it feels really great,” said Saini.

Saini also talked about Royal Challengers Bangalore failing to clinch an IPL trophy over the last 12 seasons. Despite being equipped with a star-studded squad, the Bangalore franchise has failed to lift the trophy since the tournament’s inception. The last time when RCB had reached the final was in 2016 where they had lost to Sunrisers Hyderabad.

“Yes I also feel the same. Before I played for them I was surprised by it. But after I played for RCB realised that all the team players, even those sitting outside, realize that the effort is the most important. Everyone is giving their 110 percent effort even though results might not show it,” replied Saini.

On the back of his impressive bowling performances in the IPL and across the domestic circuit, 27-year-old Saini has already broken into India’s limited-overs squad. Moreover, many veterans of the game are currently backing him to make a debut in Test cricket too.

’25-30 photographers were taking my pictures’ – Shane Warne recalls his changed ...