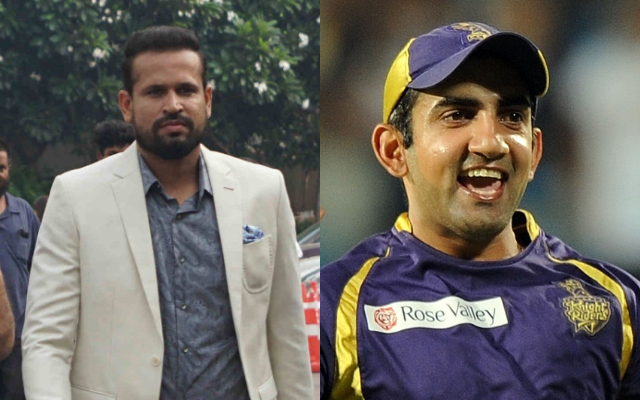 The Kolkata Knight Riders (KKR) was always a huge brand given that the Bollywood superstar Shah Rukh Khan was the co-owner of the franchise. But the team didn’t perform well in the first three seasons of the Indian Premier League (IPL). However, the management bought Gautam Gambhir in 2011 auction and named him the skipper which changed the fortunes of the side.

Under his inspired leadership, KKR went on to win the IPL in 2012 and 2014. Yusuf Pathan also played a crucial role in these title triumphs as he played for the franchise for so many years after being released by the Rajasthan Royals. Recalling those golden days, the Baroda cricketer praised Gambhir’s captaincy and also stated he backed his players a lot.

Giving more insights into the former India cricketer’s leadership skills, Yusuf Pathan mentioned that Gambhir used to interact with everyone in the team. “I played seven years for KKR under Gautam Gambhir. He was an exceptional captain and his planning was perfect and he used to back us a lot.

“He used to interact with all players, team management, support staff to take their knowledge on the game. But, when he’s on the field, he does whatever he feels right and he achieved a lot of success with that strategy,” he said during a live session with Mohammad Kaif on Monday.

Gambhir changed KKR into a champion side, says Yusuf Pathan

Yusuf Pathan also lauded Gambhir for completely changing the KKR side during his stay with the team and also stated that he has a lot of memories playing for the franchise for seven years. “The way he changed KKR team in to a champion side is exceptional. There were many memorable moments with KKR in my seven years,” the 37-year-old further added.

As for Gambhir, he joined the Delhi Capitals for the IPL 2018 and eventually retired from all forms of the game later in the same year. He joined the politics and is the BJP MP now. Yusuf Pathan, meanwhile, represented Sunrisers Hyderabad (SRH) for a couple of years and fared decently for them as well.

Steve Smith names one thing he looks up to while watching The ...