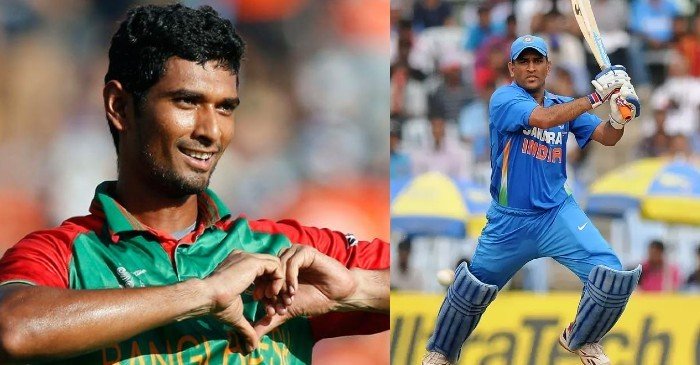 ‘I am his huge fan of MS Dhoni’: Mahmudullah opens up about emulating MS Dhoni’s style of batting

One of the best finishers produced by Bangladesh cricket, of-late, Mahmudullah Riyaz, has recently heaped praises on his Indian counterpart, MS Dhoni and his batting style.

The game has seen several successful finishers such as Michael Bevan, Michael Hussey, and many others, but none have had the impact close to the talismanic Indian wicket-keeper batsman.

Dhoni is the only batsman to score 10,000 ODI runs in the list of leading run-getters dominated by the top-order batsman. The reason why his feat remains special is that Dhoni came in to bat at number five and six, throughout the entirety of his ODI career.

Above all, MSD has successfully shepherded the Indian team to competitive totals from precariously placed situations.

Also, there have been numerous instances when the Indian team banked on Dhoni to steer India to victory. The Ranchi-born wicketkeeper-batsman, in his trademark style, took the game deep where the bowlers felt the pressure more, and on uncountable occasions finished the chase with a maximum.

“I’m a huge fan of MS Dhoni, the way he controls himself. He also batted at five-six for the India team, and whenever I sit idle I try to watch his innings, even watch live games of his. And try to learn how he but before the branch event himself in the game,” Mahmudullah said during his interaction with Cricfrenzy.

“It is not easy having 50 plus average in ODI cricket for so many matches and having a strike rate of 90 plus, it’s amazing and the way he controls the game till the last, similarly I also have to bat at five-six, so I try to learn these things from him. He’s been a great influence in my cricket arena,” added Bangladesh”s designated finisher.

Both Mahmudullah and Dhoni have shared the field multiple times whenever the arch-rivals India and Bangladesh locked horns in the last decade.

Most famously, during the virtual quarter-finals of the 2016 T20 World Cup, when the game was well within reach for Bangladesh. But the Tigers faltered under pressure in the final over of the match by losing three wickets off consecutive balls. Last of which, came two to the brilliance of Dhoni, who outran the batsman at the non-striker”s end.

‘I Salute to the spirit of human endurance’ – VVS Laxman praise ...

Top Stories: Things that made news in the cricket world today