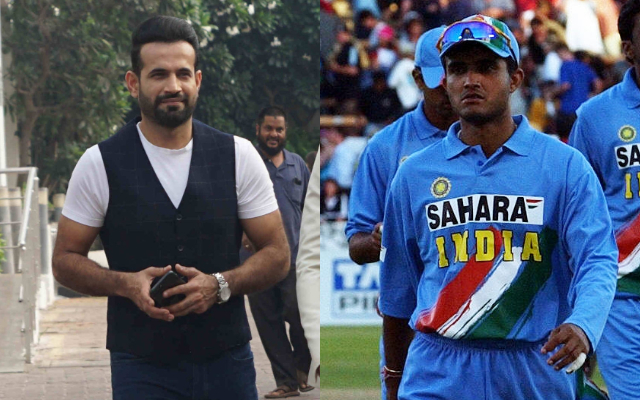 Irfan Pathan burst on to the scene in India’s 2003-04 tour of Australia and he didn’t go unnoticed. The then 19-year-old was a spring chicken and the tour kick-started his career. However, to start with, Sourav Ganguly, the Indian skipper, was a tad apprehensive and hence was against picking the youngster for the tour. The Prince of Kolkata wasn’t willing to take a risk with the speedster.

Irfan made his debut in the Adelaide Test in December 2003 where he picked up Matthew Hayden’s wicket in the first innings. But it was in the tri-nation series, also involving Zimbabwe, that Irfan went in at full throttle. Going down the memory lane, Irfan understands that a tour of Australia could take a whole lot out from someone, especially who’s making a maiden appearance.

“Touring Australia is tough; going there as a 19-year-old, you endure a lot,” Irfan was quoted as saying in Sports Tak. In the tri-nation series, Irfan became the leading wicket-taker, picking up 16 wickets from 10 matches with best figures of four for 24.

“I remember, even Dada [Ganguly] told me at the end of the tour: ‘Irfan, you might not know, I didn’t want you [in the squad] for the tour. I had said ‘no’ during the selection meeting. Not because I had seen your bowling, but I didn’t want to take a 19-year-old to an arduous tour of Australia’. But, when I actually saw you, I was completely sure you’d do well’,” Pathan stated.

Ganguly would back a youngster who was good: Irfan Pathan

Pathan, who retired from international cricket back in January, praised Ganguly for backing a young player irrespective of where he was from.“One thing about Dada was, that he would back a youngster who was good — it didn’t matter who it was, or where he was from. If Ganguly thought that the youngster was giving his all for the team, he didn’t bother about anything else,” he added.

Irfan’s international career lasted around nine years until October 2012. In 29 Tests, 120 ODIs and 24 T20Is, he churned out 301 wickets with nine five-wicket hauls. He was also the Player of the Match in the final of the inaugural T20 World Cup in South Africa.