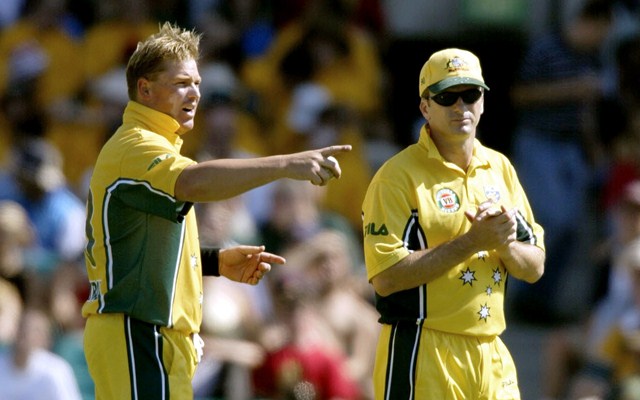 The bitterness between two Australian stalwarts, Shane Warne and Steve Waugh, is not a well-kept secret. Warne, on many occasions, has expressed his animosity towards Waugh. At a time when there is no cricket action due to COVID-19 outbreak, Warne had reignited the spat with Waugh recently by calling him ‘most selfish cricketer’ in a tweet.

Warne, in a tweet showing Waugh’s run out statistics, had called the former Australia skipper ‘selfish’. A few days after the tweet, Waugh had also fired back saying that the leg-spinner’s comments were a reflection of Warne himself.

Now, another Australia captain Mark Taylor has given his take on the feud between the two Aussie stalwarts. Taylor was asked about the spat between Warne and Waugh on Australia news channel Channel 9’s Sports Sunday show.

“They’re not best mates, there’s no doubt about that. But when they played together … they were fine,” Taylor said in response to the question.

Taylor also recalled the 1999 series against West Indies when the seeds of bitterness were sown between Waugh and Warne. Taylor revealed that Waugh decided to pick spinners Colin Miller and Stuart Macgill instead of Warne in the 4th and final Test, and the feud was ignited post that incident.

I would’ve gone with Shane Warne in that match: Mark Taylor

“Steve had to make a decision for the last Test against the West Indies in 1999 between his two leg spinners … Warnie was coming back from a shoulder injury and not bowling at his best. For the final Test match, Steve went with MacGill and left Warne out, and that certainly irked Shane Warne at the time, and I don’t think he’s ever forgiven him,” Taylor revealed.

Australia registered a victory against West Indies in that game. However, according to Taylor, it was a mistake to drop a player like Warne in that Test. Taylor further said that he would’ve gone with Warne if he was the skipper of Australia at that time.

“At the time, no. I didn’t think it was (the correct decision),” he said. “If you had to make a decision between the two leggies, which I think Australia had to do at that stage because Lara was playing so well, I’d have gone for the guy who’s been great for so long, even though he wasn’t at his best. The must-win game, I would’ve gone with Shane Warne,” concluded Taylor.