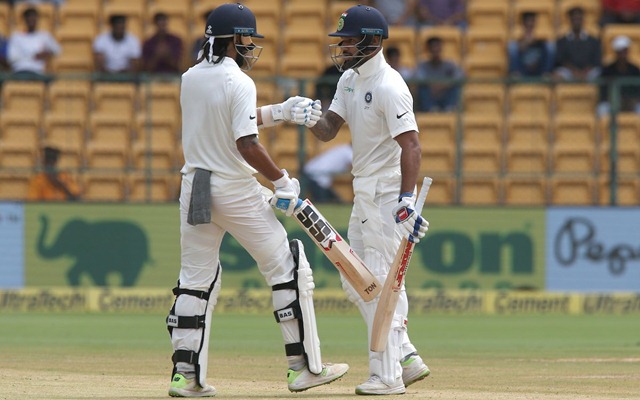 Shikhar Dhawan had a Test debut in 2013 to be remembered for ages. He smashed 187 runs off just 175 balls against Australia in Mohali. He had a terrific opening stand with Murali Vijay of 289 runs. What fans didn’t at the time was that it was the beginning of one of the most fruitful opening partnerships for the Indian team. Over the years, the duo has got along quite well both on and off the field.

During a live session with Ravichandran Ashwin, Dhawan shared some kind words for his once Test opening partner and friend, Murali Vijay. The pair had played in 24 Tests together. They have some terrific partnerships. During the interaction, the Delhi batsman also said that Vijay and he have arguments but they quickly sort it within themselves.

Vijay is a lovely character on and off the field: Shikhar Dhawan

“He is a lovely character both on and off the field. I know him very closely. He is a beautiful soul. For everything, he is a bit like ‘not like this, not like that’. I am a ‘bindaas’ character,” Shikhar Dhawan said.

“I tell him ‘you’re like my wife’. Sometimes, when we don’t take a run, we have an argument but it gets sorted soon. And it’s very difficult to understand him. You need to have a calm mind and patience to understand him,” Dhawan added.

Ashwin hosts an online show on Instagram named, ‘Reminisce with Ash’ where he invites a guest to talk about an iconic match. It was during this discussion when Shikhar and Ashwin talked about Vijay. Ashwin and Vijay are also good friends off the field having played at the same state team for years.

“But he is a lovely chap. I love opening with him. We have done very well for the country. We are still very good friends. Of course, I look forward to spending time with him and having a good laugh with him. Sometimes, when he says something, I don’t understand. But after 1-2 years, when I recall what he said, I understand it then” Dhawan said.

Both Dhawan and Murali have been out of the Test side for quite some time now. Dhawan played his last Test in England in 2018 and was dropped from the side after a poor series. Vijay was also one of the players who faced the axe after the poor series in England in 2018.

However, he was drafted back into the side for his experience in the Australian tour which happened in 2018-19. But a string of poor scores there resulted in him getting dropped again. While Dhawan continues to play for the ODI and T20I side, Vijay’s international career has almost come to an end.

‘He must think once before speaking’ – Danish Kaneria slams Shahid Afridi ...

‘I could not bowl Inzamam uq out even once in the nets ...