Throwback to 2019 ICC Cricket World Cup Let’s look back at the England vs New Zealand final on July 14, one of the greatest One-Day match of all times
imrhjatofficial
0
103 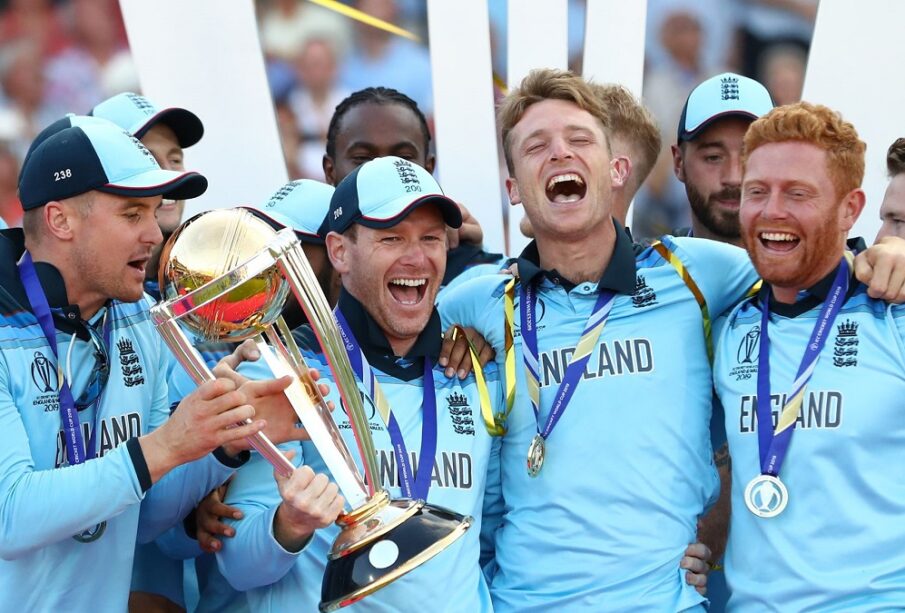 The 2019 ICC Cricket Word Cup showed us almost everthing  from Jofra Archer’s bouncers to Mitchell Starc’s yorkers, Rohit Sharma’s hundreds to Virat Kohli’s antics, and at the end a Tied Super Over.

Yes, a tied Super Over in a World Cup Finals !. So in the Throwback to 2019 Cricket World Cup Let’s look back at the England vs New Zealand final on July 14, 2019, one of the greatest One-Day International match of all times.

England came to the Final after beating Australia by eight wickets & their momentum was unmatched at that stage. On the other end New Zealand came to the final by beating India by 18 runs in the first semi-final.

Chasing a moderate target of 240 runs, India got off to a horrendous start as New Zealand rattled the top-order. Matt Henry got Rohit Sharma (1) caught behind while Virat Kohli (1) got leg-before off Trent Boult’s delivery. Henry returned and engulfed KL Rahul (1), who was also caught behind.

MS Dhoni and Ravindra Jadeja rebuilt India’s innings as the duo added 116 runs. Dhoni assumed the role of second fiddle to Jadeja, who played aggressive shots from ball one and along the way completed his fifty.

Martin Guptill pulled off a brilliant run out and dismissed MS Dhoni (50) (Tears in my eyes). When India needed 24 runs off nine balls, Lockie Ferguson bowled Bhuvneshwar Kumar for a duck and Neesham completed the formalities as he got Yuzvendra Chahal (5) caught behind. India was wrapped up on 221 after 49.3 overs.

New Zealand could manage just 241 runs from their 50 overs in the big finals. In reply, England struggled to reach the total as New Zealand’s bowlers did really well in the closing stages as the match ended in a tie.

England were all out for 241 on the last ball of the 50th over, chasing a target of 242 runs against New Zealand.

The hosts needed 15 but could only score 14 in the last over of their innings as Mark Wood was run out seeking the second run that would have won it for the England.

But wait… that was not enough, both teams then ended up on equal scores in the Super Over as well!

For England inform Ben Stokes came in for the Super Over with Jos Buttler amid scenes never before seen at the home of cricket.

New Zealand needed two off the last ball of Jofra Archer’s over but Martin Guptill was run out coming back for the second run and England was declared winner due to hitting more boundaries on the day.

This was also the first time in a World Cup final that winner was decided on the boundary count rule.

New Zealand lost their second consecutive World Cup final & were at a loss for words. There were no words to describe the feelings.

Corey Anderson in line to play for the United States national cricket ...

Yuvraj Singh reveals how Flintoff fired him up to hit 6 sixes ...