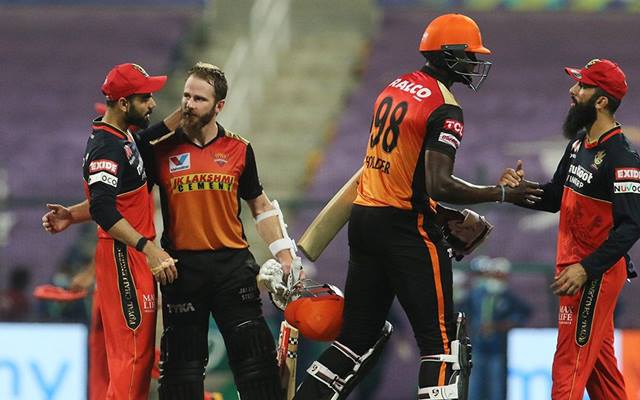 Eliminator of Indian Premier League In 2020 action was seen between Royal Challengers Bangalore and Sunrisers Hyderabad. In this decisive match both teams were about to speak their hearts, but it was the Sunrisers who saw their sun rising in the end. SRH won the match by six wickets. Batting first, RCB posted a lower-average target of 132 runs on the board, where a half-century by AB de Villiers (56 for 43) became the backbone of their batting order.

Kane Williamson was named as the player of the match as he took his team home in an important match with his steady batting. The brief innings of Aaron Finch (32 for 30) contributed to the team’s score. Rashid Khan brought an economical spell, but in a rare example he had to be denied the wicket. Jason Holder gave a superb performance and took three wickets for the team.

Chasing a simple target, the opening order for Hyderabad failed, but it was Kane williamson And Jason Holder who performed all the responsibilities for the team. Williamson scored a brilliant half-century (50 * 44 runs) to take the team home. Holder supported him by adding a good 24 * 20 pace. Adam Zampa scored just 12 runs in four overs to maintain a superb economy. Mohammad Siraj took two wickets for his team.

If you talk about the first innings, I don’t think we had enough runs on the board. We made a helluva game in the second half, the position we made ourselves in the second half. It is a game of fringe and it would have been a different ball game if Kane had been taken there. Overall he put us under a lot of pressure in the first innings. Some soft dismissals, some lucky ones for them as well and we just didn’t have enough runs on the board. Maybe in a little vein, maybe a little hesitation, we need to be more expressive with the bat. We did not have any stage in the game where we got away from the opposition. We allowed the bowlers to bowl in the areas they wanted and did not put enough pressure on them. In the last 2-3 matches we have hit it straight to the fielders, a lot of good shots going to the fielders.

It has been a strange kind of phase in the last 4-5 games. Some people have stood up and had a good season, Devdutt is one of them and Siraj has had a good comeback. Yuzi has become as solid as ever, AB has become as solid as ever. One of the pairings for RCB and Devdutt, they have stepped well and getting 400+ runs is not easy. He has played with considerable class and efficiency for the team. Very happy for him

Others contributed but just not enough. It also tells you what is the strength of teams in IPL, no team is favorite because every team has strong players, one of the other reasons is playing only three places and no home and away advantage. Is not. Same conditions for all and that is why this year has been one of the competitive IPL. It was amazing that he had the opportunity to come out and play. There is a big picture going on here and we are all contributing to it. To all our fans who have supported us like every year, we just want to thank them.

As we knew that we had to defeat the top three teams to make it to the play-offs. My nails are fine right now. They have great influence for us. We like Sandy and Holder throwing five overs at the top. Then we try to bowl Rashid and Natarajan in the middle overs. There is a lot of pressure on Rashid to perform. Congratulations to Natarajan. Ken is our banker. He sticks there and plays a pressurized innings. I am running out of exaggeration for these two blocks (Rashid and KW). With the class of the batting line up, you knew that there was something in the wicket. The boys bowled brilliantly in the middle overs. It is too early to say. We obviously have Delhi to play. We are talking about their world class bowling side. But I am excited.

Look it was a tough game. It was not easy against a class like RCB. The surface was a bit difficult and it was not easy to do anything on it. It was a challenge for us to limit them that way. He also had two world class spinners. We learned about his spells without missing too many wickets. Batting at 4 can be very different and depends on the surface. A few shots of Jason helped. People are giving tough competition. He (the holder) is colder than me. The role of Allrounder in the team has been good by him.