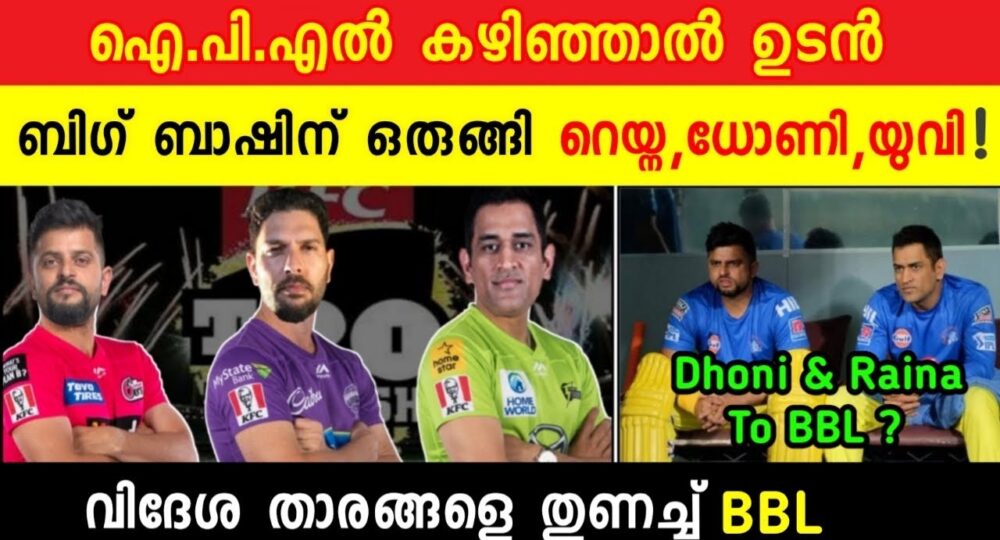 Cricket Australia (CA) is all set to kick-start the 2020 edition of the Big Bash League (BBL) from the second week of December. Around the same time, the Indian cricket team is scheduled to tour Australia for a Test and limited-overs series. Many star players will be giving the 10th edition of the BBL a miss.
Thus, to add the much-needed star power in the tournament, Cricket Australia has agreed upon allowing the overseas cricketers for participating in BBL 2020. The clubs can recruit a maximum of three international players in their playing XI. However, all the clubs will have to finalize their international entries soon as the players will also have to follow the quarantine rules after arriving in the country.
Reports in cricket.com.au suggest that the BBL teams are eager to pick three Indian players namely MS Dhoni, Suresh Raina and Yuvraj Singh. Notably, both Dhoni and Raina retired from international cricket on August 15, 2020 while Yuvraj had announced his retirement last year. Thus, none of the three players would be binded with any sort of commitment when the BBL will be underway this year.
The former swashbuckling batsman Yuvraj is very much eligible to take part in BBL 2020 and it was earlier revealed that the southpaw is interested in playing on the pitches of Australia. However, the same cannot be said for Dhoni and Raina. Both the cricketers are an integral part of the Indian Premier League (IPL) and the Board of Control for Cricket in India (BCCI) doesn’t issue a No Objection Certificate (NOC) to the players who are actively involved in Indian cricket.
While MS is captaining the IPL franchise Chennai Super Kings (CSK) in the 13th edition of the Indian Premier League (IPL), Raina had given the tournament a miss this year citing personal reasons. However, he is expected to be back in auctions or for CSK for the next edition of the Indian league.
Earlier this year, Raina had urged the Indian board to allow the non-contracted players to participate in the overseas leagues as it would help them gain exposure and experience. As of now, no Indian cricketer is allowed to participate in any overseas tournament unless he has taken retirement from both international and domestic circuit including the IPL.

Copyright disclaimer under section 107 of the copyright act 1976, allowance is made for”fair use “for purposes such as criticism, comments, news reporting, teaching, scholarship
and research. Fair use is a use permitted by copyright statue that might otherwise be infringing. Non-profit educational or personal use tips the balance in flavor of fair use.