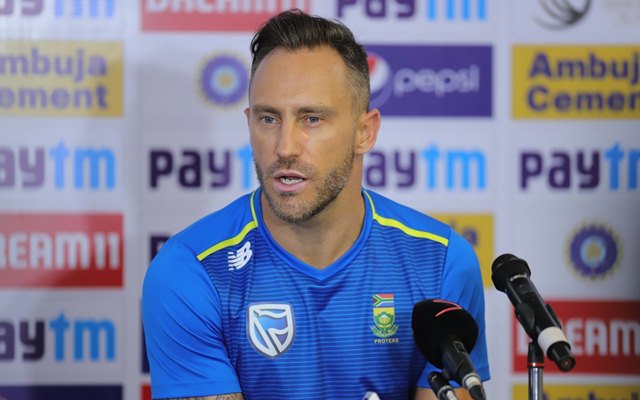 The COVID-19 pandemic has put a halt at the sporting scenario across the globe. The much-awaited IPL 2020, which was scheduled to get underway on March 29, has been suspended until further notice by the Board of Control for Cricket in India (BCCI). However, to curb the anticipated losses, the board is trying its best to search for an alternate window to host the tournament this year.

South Africa’s Faf du Plessis, who has been an integral member of the CSK squad over the years said, it will be difficult for players to tour if a full-length IPL is held in 2020. He has said that he is open to quarantining himself for 14 days if a shortened version of IPL 2020 is held this year.

“It’s important that we as players need to adapt and evolve to what we are currently facing. I am for quarantine for 14 days,” Faf du Plessis said during Star Sports show ‘Cricket Connected’.

“I think if we start doing that tours might become a lot shorter. So if you play a four-match test series of two months IPL and another 14-day period of quarantine after that, you are looking at three months of touring playing just one team.

“So I’m all for quarantining but at the start, we must play just a two-match series or an IPL that lasts for a month,” added the 35-year-old batsman.

Along with IPL 2020, the commencement of this year’s T20 World Cup is also in jeopardy. The mega-event, which was scheduled to get underway in Australia in October, could be pushed further in the wake of COVID-19 pandemic. The ICC will be discussing the fate of the T20 World Cup in its board meeting this week.

Faf du Plessis also said that he believes both the T20 World Cup and the IPL 2020 could be hosted once the COVID-19 subsides and the sporting action resumes.

“Both IPL and the T20 World Cup (are feasible). We can move these dates. The IPL is flexible, it’s looking to move. The same with the World Cup. If it means, you have to move the World Cup by 2 or 3 months, so be it.

“It’s still close enough to what it is normally, it’s not like you’re extending it by 2 years. And the players get to play a World Cup. I am in for trying to shift those dates if you have to. If you don’t, then great. I think both tournaments are definitely still an option,” Du Plessis said.

‘You are considered as a madman if you are true’ says Younis ...