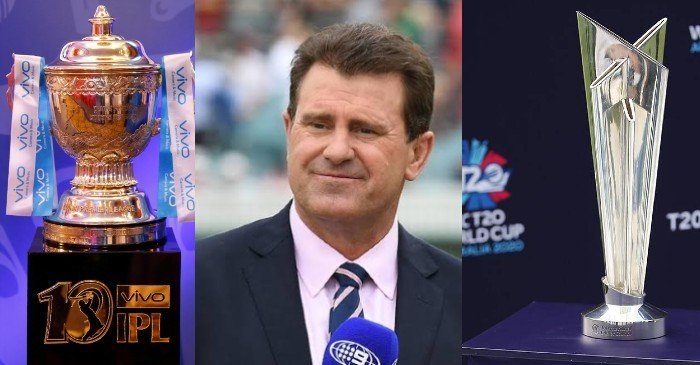 Former Australian captain, Mark Taylor, who enjoyed a successful stint as a commentator with Channel Nine, has predicted the likely scenario if and when the cricket finally resumes.

The cricketing calendar of 2020 was lined up two marquee T20 events in the form of Indian Premier League (IPL) and T20 World Cup in Australia.

Due to the global pandemic, the clouds hover over the conduct of both the tournaments, paving the way for speculations from various entities in the cricketing fraternity.

With the air-travel restrictions imposed by all governments, the conduct of the T20 World Cup remains unlikely. Also, the fourteen-day quarantine period makes it even more unlikely for the tournament to get the nod.

According to Taylor, a Cricket Australia (CA) must be pushing the BCCI for the conduct of IPL in the window for the T20 World Cup, to expect them to tour Australia later in the year.

Rather than entire teams travelling to Australia to participate in the event, it is more feasible for letting players decide if they want to travel to India for the cash-rich league.

“I think that’s the most likely scenario [postponement of T20 WC] because 15 teams planning to come to Australia between October and November, 45 matches over a proposed seven venues. In the world that we live in, international travel is going to be extremely difficult,” Taylor told Channel Nine.

“If the ICC were to postpone that event, that will open the door for the BCCI to say that ‘we will have our IPL in India’ which actually puts the onus back on individuals whether they want to travel, rather than nations, moving the whole team over to a certain country,” added Taylor.

“Cricket Australia will obviously want the T20 WC but at the same time will be working hard with India that if their players go there for the IPL, they will want India to come to Australia for our summer of cricket next year, I know there are lots of balls in the air,” he said.

In conclusion, Taylor delved on the fact that cancelling the ICC tournaments won’t affect the ‘Big Three’, i.e., Australia, India and England, but would undoubtedly concern the lesser nation depending on their funds.