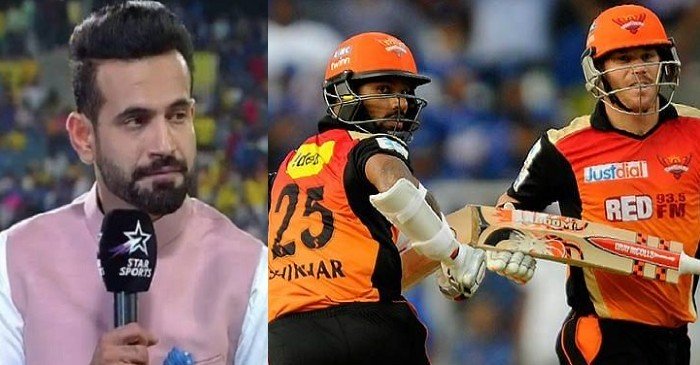 Former Indian pacer, Irfan Pathan, during a recent conversation with opener Shikhar Dhawan, disapproved David Warner”s comment about the latter not wanting to take the strike against the fast bowlers.

Australian opener Warner engaged in a conversation with his Indian counterpart Rohit Sharma, talking about batting with Dhawan lately.

Rohit and Dhawan are one of the mainstays of Indian batting in white-ball cricket at the opening slot. While, Dhawan and Warner worked well in tandem for the Sunrisers Hyderabad, facing the brand new ball.

Pathan revealed that Warner’s dig at Dhawan about preferring to take the strike first up only against spinners irked him.

Also, Pathan recalled Dhawan”s glorious ton against the Aussies on his Test debut in 2013, where he smashed the pacers to all corners of the ground, during his epic 185.

Further, Pathan mentioned about Dhawan”s memorable run in the subsequent 2013 Champions Trophy in England, where he scored tons at will.

“I remember your first ton was against Australia. No matter whether you play against Australia at home or away from home, you have to play their fast bowlers. Talking about the Champions Trophy, you faced many fast bowlers and scored runs against them. I disagree with what he said. If I put Warner on a rank turner, even he wouldn’t be comfortable, he might ask Steve Smith to play. There are certain things one shouldn’t say. I know I personally didn’t like what he was trying to say,” Pathan told Dhawan during an Instagram live session.

To which, the swashbuckling Indian opener concurred Pathan statement by saying that he is not afraid of facing peace as he has to face seamers up-front in all formats of the game.

“No, I disagree to that. It’s not like I don’t want to face fast bowlers. Everyone has their views, I am an opening batsman, I know I have to play pacers. I might not face them in the first over but I have to face them in the second. It’s been eight years since I have been opening for India. And I am one of those players who opened in all three formats of the game,” Dhawan replied.

Dhawan concluded by suggesting that he does tend to take some time to settle down at the not-striker”s end. Also, Dhawan said that it is not easy to play in front of quality seamers on conditions suitable to their trade.

“I agree with the fact that I don’t prefer to take the strike first ball, I like to settle a bit at the not-striker”s end and then face the bowlers. Having said that, if I am opening the innings with a youngster, who is not comfortable facing the first ball, I will do it as I will never put a youngster under pressure. If we are playing on a seaming track, it’s not easy for anybody but we go there and fight it out,” Dhawan signed off.