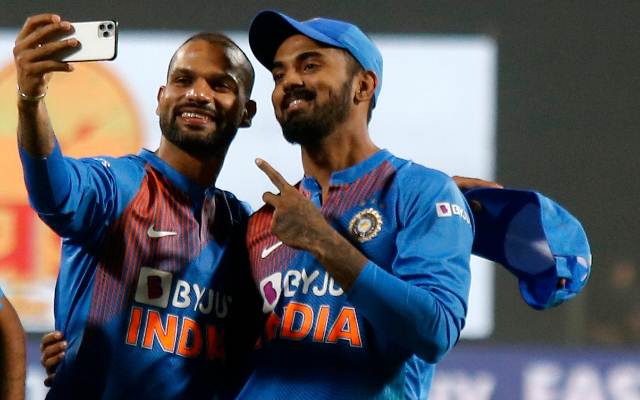 KL Rahul wasn’t a regular member of the Indian team as Rohit Sharma and Shikhar Dhawan were shouldering the mantle as the openers. However, after Dhawan picked up a shoulder injury, Rahul has made full use of the opportunity at the top of the order. He scored 224 runs in the New Zealand T20Is and also impressed skipper Virat Kohli and the team management.

He also conjured appreciation for his wicketkeeping which has kept Rishabh Pant out of the elevens. To some extent, Dhawan has gone out of contention owing to Rahul’s brilliance in the last few months. Recently, during an Instagram Live session with former all-rounder Irfan Pathan, Dhawan heaped praises on Rahul. He said how Rahul’s knock in a series against Sri Lanka left him awestruck.

“Of course, KL Rahul is playing very well. It gives me a lot of joy in watching him bat from the other end. He is on another level. I watched him bat during the Sri Lanka series. It was my comeback. I was at the non-striker’s end. He was hitting it all over the park. It was on a different level. I was loving it. He is playing so well. Rohit is playing so well,” Dhawan was quoted as saying during the chat.

I am aiming for the World Cup: Shikhar Dhawan

Despite having a dry run in recent times, Dhawan sounded optimistic of making the cut for the T20 World Cup later this year in Australia. He understands the importance of grabbing opportunities with both hands and hence, has been focussing on his fitness and scoring runs. Moreover, he admitted that injuries in the last year or so haven’t helped his cause.

“I am aiming for the World Cup, I am preparing for it. I am working on my fitness. I know whenever an opportunity comes, I should be ready to play. Team selection is not my hands. I want to perform. Over the last 1 year, it’s been about getting injured and making comebacks for me. It’s part and parcel of the game,” he added.

Since September 2018 after the tour of England, Dhawan hasn’t played Test cricket. He has only been playing ODI and T20I cricket since then. Before getting injured, he did his bit with scores of 52, 74 and 96 in his last three appearances for Team India.