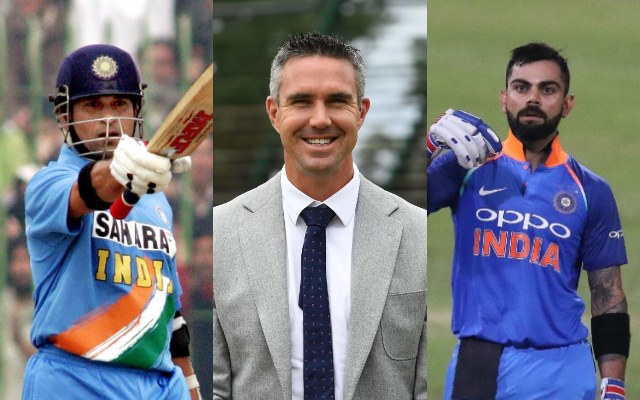 Virat Kohli has been in amazing form with the bat across all the formats over the years. He has simply taken the batsmanship to another level with supreme consistency and his numbers are just staggering after playing for more than 10 years of international cricket. Many are also backing him to break Sachin Tendulkar‘s world record of 100 centuries across formats and Kevin Pietersen has opined over the same now.

The current India skipper has so far amassed 70 centuries, 43 in ODIs and 27 in Tests, in his career and is 31 tons away from going past the unimaginable. He will turn 32 this November and probably has five more years of cricket left in him. Rather Kohli has also hinted at retiring from one of the formats (mostly T20) after a few years to keep himself going.

When asked to weigh in over the possibility of Virat Kohli breaking Sachin’s record, Pietersen believed it all depends on how long the 31-year-old plays. He also pointed out that there was no IPL or T20 format for the majority of Sachin’s career and his injury breaks led to him playing for a longer period of time. The former England international also highlighted that Kohli isn’t relaxed like Tendulkar was and is a lot aggressive on the field.

“It’s difficult because of injury, the longevity of Tendulkar’s career. Tendulkar wasn’t as emotional when he was in the field and he did not carry the same sort of aggressive attitude on the field. He was a lot more relaxed. It depends on how long Virat Kohli continues to play.

“Remember, Kohli plays all three forms of the game, plus he plays the IPL. For the majority of Sachin Tendulkar’s career, there was no T20 cricket and there was no IPL. So it all depends on how long Kohli plays for,” he said in an interview to Times Now.

Kevin Pietersen was also asked to pick the greatest batsman from the current fab four, Virat Kohli, Kane Williamson, Steve Smith and Joe Root, in modern-day cricket. And he quickly went with the India captain stating that he is notch above every other batsman at the moment and is the best player in all the three formats. “No other option. It’s Virat Kohli, across all formats. He is way above everybody else,” KP further said.

Mohammad Amir, Wahab Riaz will be part of England tour despite losing ...