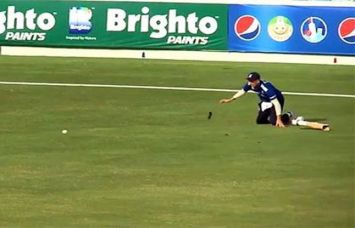 Liam Thomas,The 22-year-old Yorkshireman, who is a lower right leg amputee and plays for England Physical Disability, became an instant hit on social media when footage of him losing his artificial limb whilst fielding went viral.

The moment came in the fifth over with Pakistan in pursuit of a very gettable 138 and England desperately trying to save every run. Thomas, stationed at deep square, charged after a well-timed sweep shot which appeared destined for the boundary rope.

Launching himself to stop the ball but losing his prosthetic leg in the process, Thomas was presented with a rather unusual dilemma of what to do first – hobble after the ball and throw it to the keeper or reattach his leg?

“I thought it was going to go to the boundary,” he recalled.

“So I flung myself at the ball, got a hand on it, stood up and thought ‘where’s my leg?’

“I looked at my leg and thought ‘oh no, do I put it back on?’ I then looked at the ball, looked at them running and realised I just had to get the ball in as quick as I could. With the runs we had on the board I knew it was going to be a tight game. Natural instinct took over.

“Everyone has been saying ‘you are amazing’ but for me what happened in that clip is normal. My leg has come off a few times when I’ve been playing football, or sometimes when it has become loose. All the lads in the team were laughing their heads off.

The England Physical Disabilities Cricket squad are challenging themselves to complete a marathon a day as they keep their fitness while waiting for the season to begin – and they will look to fundraise for the Lord’s Taverners at the same time.

The squad, which enjoyed a successful 2019 finishing as runners-up in Physical Disability World Series, have pledged to complete a combined 26-mile target everyday while at the same time looking to support the leading youth and disability sport charity.

Yuzvendra Chahal discloses the reason why he ...

Yuzvendra Chahal discloses the reason why he ...