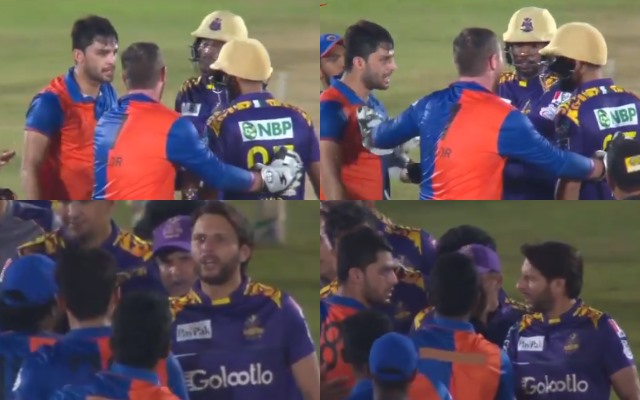 The inaugural edition of the Lanka Premier League (LPL) is currently witnessing some top quality cricket. However, with this, the players are also feeling the heat and recently an incident of Pakistan cricketers Shahid Afridi and Mohammad Aamir Oral place Naveen-ul-Haq of Afghanistan attracted the attention of many people.

Soon after the match between Galle Gladiators and Candy Tuskers ended, Aamir and Naveen started going with each other. The latter was clearly not happy and when Afridi, the captain of the Gladiators, came out to join hands with the opposition team, he had something to say to the youngster.

Later, Shahid Afridi also made it clear in a tweet that he advised Naveen-ul-Haq not to engage in unnecessarily abusive conversations. However, the Kautuk of Afghanistan came with a ‘Pay respect‘Tweet furthering the debate on the matter. Meanwhile, Mohammad Aamir has revealed what Shahid Afridi said to Naveen after the match.

He said, “At the end of the innings, I was a little uprooted and the heart rate as you know is already there.” Shahid Bhai was trying to make them understand that these are not the type of morals that we should have, that they should not treat their superiors so that they become a gentleman; This is cricket and you get hit for 4 and 6, but you can get wickets as well, ”Aamir said while talking to Pak passionately.

Nothing to be honest, says Mohammad Aamir about Naveen

Mohammad Aamir also said that Naveen is a youngster and he will only learn when he plays more in the near future. “He [Naveen-ul-Haq] Is a young player and will learn it when you are new to cricket; When I started, I still had a habit of getting into trouble with every other batsman. This is cricket and things happen in the heat of the moment – nothing is personally honest, ”the left-arm pacer said.

Talking about himself, Mohammad Aamir pointed out that he tries to treat everyone friendly nowadays and there is no use of wasting aggression and energy without any reason. “If you see me nowadays, I’m very friendly with everyone; I do not kill batsmen; One should concentrate on his bowling and give up all aggression while taking a wicket;

“Expressing aggression without any reason is no use as a bowler, it simply wastes your energy which is the best use in getting the batsman out. What I said would have been better, had he been putting his energy to get me out, ”Aamir protested.