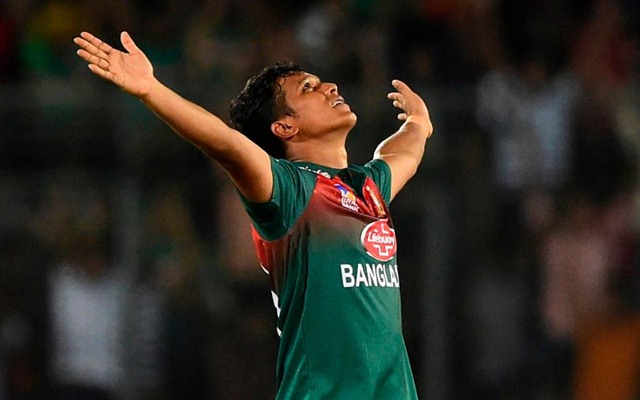 Be it his aggressive leadership approach or impressive batting display, the then India skipper Sourav Ganguly used to be a youth icon during his playing days. Many young prospects, especially in the subcontinent, used to look up to ‘Dada’ in the early ’90s. Ganguly used to be no less than an idol for all players who used to dream of breaking into the national side one day.

Ganguly, as a captain, entirely changed the face of Indian cricket, especially in overseas Tests. Proving himself as the best Indian captain on the foreign soil, Ganguly steered the national side to the victory in 11 out of 28 Tests. The popularity of ‘Dada’ was second to none during the peak of his career and his fame wasn’t limited only to Indian boundaries.

Bangladesh all-rounder Mohammad Saifuddin, who is a left-handed batsman and a right-handed pacer, revealed that he used to follow Ganguly from a young age. Saifuddin also made a surprising revelation about his pet name in his locality. People used to call Saifuddin as Sourav Ganguly of Feni for following the former Indian skipper.

“If I say from the very beginning when I was young, our Feni was almost next to the Indian border. At that time if we move the TV antenna here and there we used to see a national channel besides BTV,” said Saifuddin.

I used to bat with my left hand and bowl with my right hand like Ganguly: Mohammad Saifuddin

“At that time, Sourav Ganguly and Sachin used to open the bat and he also used to bowl. Sourav Ganguly also has a very good contribution with his bowling,” Saifuddin said in a Facebook live chat session with CricFrenzy.

Saifuddin also said that he grew up watching Ganguly’s games and he always used to copy the Indian veteran’s playing style. Saifuddin, who bats left-handed and bowls with his right hand, said that his love for Ganguly has been persistent since childhood. Furthermore, he also said that among the current generation, he likes to follow Ben Stokes and Corey Anderson.

“And the biggest thing is that when I used to play in the village field, everyone called me Ganguly. Because I used to bat with my left hand and bowl with my right hand. Ever since then, there has been a love for Ganguly, and if you say about recently, it must be Ben Stokes and Corey Anderson,” concluded Saifuddin.

‘Catch up somewhere and talk it out’ – Waqar Younis’ suggestion to ...

Cricketer Sabbir Rahman accused of fist-fighting and slapping a cleaner