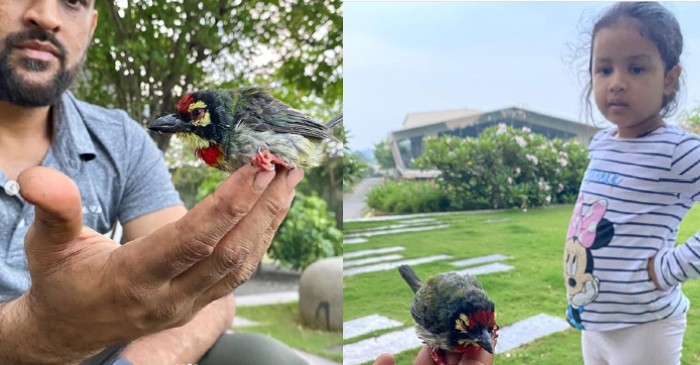 MS Dhoni is currently spending his time in Ranchi with his daughter Ziva and wife Sakshi. Dhoni‘s love for animals is a well-known phenomenon. In his huge mansion in Ranchi, Dhoni has four canines named Sam, Lilly, Gabbar, and Zoya.

Dhoni has kept himself away from social media platforms for a long time now. But, his name still remains in the spotlight due to his stature in international cricket.

Dhoni is often seen playing and training pet dogs along with his family, through wife Sakshi’s Instagram posts and stories, amid nationwide lockdown.

Every now and then his name starts trending on social media for different reasons. Talking about his personality, Dhoni is known for his cool, calm and composed temperament on and off the field. And, he never tries to attract any kind of controversy due to any inappropriate reason.

Also, he is undoubtedly a great father, who loves his daughter to the fullest. Sakshi Dhoni had earlier shared many posts showing their love.

On Tuesday, she shared a post and revealed how MS Dhoni and Ziva saved the life of an injured coppersmith barbet that was unconsciously lying in the garden of their farmhouse. She narrated the whole instance through Ziva’s Instagram account.

“Today in the evening on my lawn I saw a bird lying unconscious. I shouted for papa and mumma. The pope held the bird in his hand and made her have some water. After some time it opened its eyes. All of us were very happy,” Ziva”s latest Instagram post read, along with a picture of Dhoni carefully caressing the bird.

Shortly after, the bird flew off even though Ziva wanted the bird to stay for a little longer. Ziva”s mother Sakshi then explained that the bird needed to see her mom.

“We placed her in a basket on top of some leaves. Mumma told me it is the Crimson-breasted Barbet and is also called Coppersmith. What a pretty, pretty little bird. Then suddenly it flew off. I wanted it to stay, but mumma told me she had gone to her mom. I am sure I will see her again!” read the post further