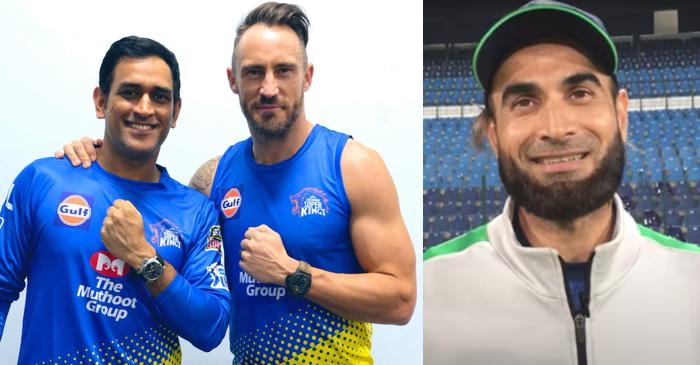 Former South African cricketer Imran Tahir has revealed that Pakistan legend Abdul Qadir is his favourite leg-spinner. Not only did Tahir say this, but he also admitted that he would pick Qadir in his all-time T20 XI.

Qadir represented Pakistan in 67 Tests and 104 Odys, in which he took 236 and 132 wickets, respectively.

In a recent interview with ESPNcricinfo, Tahir also talked about his favourite South African cricketer and picked the sexiest cricketer between MS Dhoni and Faf du Plessis.

During the interview, when the 42-year-old was asked to name his favourite South African cricketer of all-time, he went for Hashim Amla. Both the players retired from ODI cricket, along with JP Duminy after the conclusion of the ICC Cricket World Cup 2019.

A little bit later in the conversation, Tahir was asked “Who’s’ sexier: MS Dhoni or Faf du Plessis?” Responding to the question, Tahir said: “It’s a tough one…they both are cool and smart.”

Tahir has played under Du Plessis ever since the latter was appointed as the Proteas skipper after AB de Villiers gave up the captaincy. At the same time, Tahir has been the premier spinner for Dhoni-led Chennai Super Kings (CSK) since their comeback at the Indian Premier League (IPL) in 2018.

Imran Tahir shares his views on the ‘Mankading’

When the Lahore-born was questioned regarding his stand on ‘Mankading’, Tahir said that he doesn’t mind it if the bowler has given the batsman a warning.

“See, I don’t mind it if the bowler has given the batsman a clear warning. If after the warning, the batsman is doing it, again and again, I think it’s only fair to Mankad him,” the Proteas veteran said.

There has been a lot of debate regarding this form of dismissal. It involves a situation where a bowler runs out the non-striker for backing up too much before the ball is being delivered. The dismissal was named after former Indian cricketer Vinoo Mankad.

Even though the rule exists in the CCM’s rule book, players are often criticised for doing it.

‘You are considered as a madman if you are true’ says Younis ...