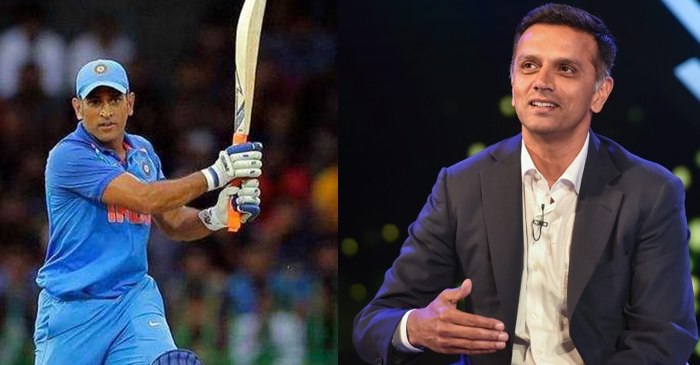 Former India Skipper MS Dhoni made his ODI debut against Bangladesh in 2004, but he made the first impact in the series against Pakistan in 2005 when he scored 148 runs in the 2nd ODI of the six-match series.

Dhoni,the Wicket-keeper batsman is the only captain to win all major ICC trophies (T20 World Cup, ODI World Cup and the Champions Trophy). Under his captaincy, India also managed to attain the number 1 position in the ICC Test team rankings.

Mahi first captained an inexperienced Indian side to the T20 World Cup triumph in 2007. He then took over the ODI captaincy, but he had to wait for leading the Test side as Anil Kumble was performing his duties brilliantly in the longest format of the game.

Over the years, MS Dhoni has been renowned for his finishing skills and is often viewed as one of the best finishers that the game has ever produced.

Former India captain and batting legend , ‘The Wall’ Rahul Dravid revealed the reason why Dhoni has been so successful as a finisher in limited-overs cricket(ODI & T2O).

You always got the feeling that he is doing something really important. But he is playing like results do not really matter to him. Not an easy situation to get in. You need to have that, or you need to train it. I potentially didn’t have that. The consequences mattered to me deeply.

“It will be really interesting to ask whether something like this comes naturally to him or something that he has potentially worked mr, ” That’s what great finishers do. They are able to get themselves in that frame of mind.”

Dhoni is currently spending time with his family in Ranchi as India continues to battle with the ongoing novel coronavirus pandemic.

There has been a lot of speculation over MS Dhoni’s future in International Cricket, but the world will get a clear picture on it once things get back to normal after the covid-19.

Everyone was eagerly waiting for the 38-year-old veteran finisher to make his return on the cricket pitch with IPL 2020, but what the covid-19 came up in between.