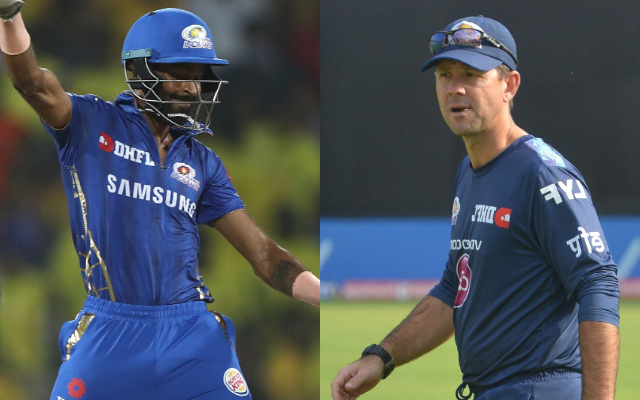 Ricky Ponting looked after me like a child – Hardik Pandya

Most of the young cricketers would love to have someone like Ricky Ponting by their side. For Hardik Pandya, the case was similar. When he arrived at the Mumbai Indians franchise, he had many stars to look up to. In 2015, they had a star-studded line-up, but more importantly, they had a great coaching staff.

With Ricky Ponting, Sachin Tendulkar, John Wright among the mix, any young cricketer’s dreams will come true. In a recently released interview, Indian all-rounder Hardik Pandya stressed on having Ponting with him during his initial days in the cash-rich league. He explained how talking to the Australian great helped him shape his game.

Ricky used to sit down with me and speak about the game: Hardik Pandya

“Ricky Ponting was someone who looked after me the best. He looked after me like a child. I used to feel like he was my father figure there,” Hardik said during an interview with Cricbuzz. “Ricky taught me so many things, he taught me situations, he taught me mindset, how strong you should be. As a new boy in 2015, I used to sit next to the hoardings. Ricky used to sit down with me and speak about the game. (With all these conversations) I started learning quickly.”

Ricky Ponting had joined Mumbai Indians as a player and captain in 2013. Having handed over the captaincy to Rohit Sharma, mid-way through the season, Ponting was soon given the role of the head coach with the franchise. He guided them to a victory in the IPL 2015. This was also Pandya’s first season with the franchise. Currently, Ponting serves as the head coach of Delhi Capitals.

During the interaction, Hardik also talked about his relationship with West Indian captain Kieron Pollard. The two have been at the franchise for a long period of time. Pollard had joined Mumbai Indians in 2010 and has been since with the franchise.

“We have such beautiful relations, our families are in touch. We talk despite all the time differences in the West Indies, we make sure we talk at least once in a month. I look up to him as my senior, my role model,” Pandya said.

‘My family got abused, people made a mockery of my father’ – ...

Lord’s releases its best home and visitors’ honours board XIs