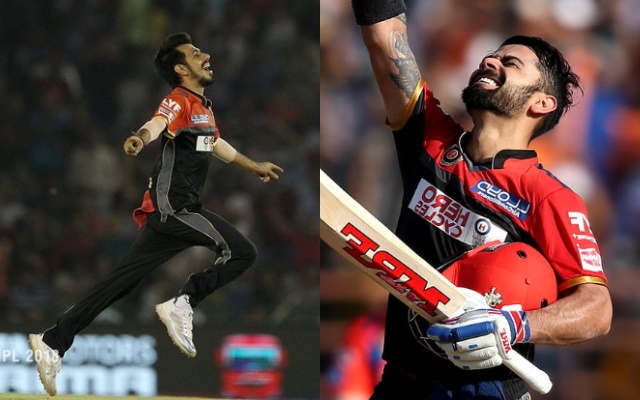 Yuzvendra Chahal doesn’t have records to boast off when it’s about batting at the domestic level. In 31 first-class, 102 List A and 172 T20s, the right-hander has a mere 632 runs with a top-score of 42 in the red-ball format. For India he has 54 runs. But recently, it was learnt that the Haryana leg-spinner isn’t a complete mug with the bat as he has a century at the U19 level back a decade ago.

In the 2008-09 edition of the Cooch Behar Trophy, he got scores of 135 and 46 against Himachal Pradesh U19. In fact, in the entire tournament, he managed 281 runs. The stats are astonishing to some extent bearing in mind his numbers in domestic and international cricket. The revelations were made by the Royal Challengers Bangalore (RCB), Chahal’s franchise in the Indian Premier League.

They also funnily asked Chahal to bat higher up the order. The Challengers took to Instagram and wrote. “DID YOU KNOW: @yuzi_chahal23 scored 1️35 & 46 in the first & second innings respectively vs Himachal Pradesh U19s in the 2008/09 Cooch Behar Trophy in Bengaluru! He scored a total of 2️81 runs in the tournament! Fancy playing up the order, Yuzi?”

DID YOU KNOW: @yuzi_chahal23 scored 1️⃣3️⃣5️⃣ & 4️⃣6️⃣ in the first & second innings respectively vs Himachal Pradesh U19s in the 2008/09 Cooch Behar Trophy in Bengaluru! He scored a total of 2️⃣8️⃣1️⃣runs in the tournament! 👏 Fancy playing up the order, Yuzi? 😉 #PlayBold #TuesdayTrivia

A post shared by Royal Challengers Bangalore (@royalchallengersbangalore) on May 11, 2020 at 11:30pm PDT

Now Virat Kohli, who’s been captaining RCB for the last few seasons, noticed the message and he is aware about the contest very well. He wrote, “Definitely exhibition.game,”

Chahal didn’t mind pulling his captain’s leg. The 29-year-old replied to Virat and wrote, “@virat.kohli scared for losing your no.3 spot bhaiya?

Here is the screenshot of Chahal’s reply

In the IPL if Chahal gets a chance to bat, it’s pretty understood that RCB are losing the match nine out of ten times. In 84 matches in the T20 event, Chahal has only 21 runs with a top score of four. But it’s his role with the ball that has helped the Challengers. In 84 matches, the tweaker has picked up 100 wickets on challenging surfaces at the M Chinnaswamy Stadium in Bengaluru.

Back in January 2019, Chahal once became the highest-scorer in an Indian eleven. In the ODI against New Zealand at the Seddon Park in Hamilton, he stayed unbeaten on 18 as India were bowled out for 92 courtesy Trent Boult’s five-wicket haul.

I am making sure that I don’t get depressed during the lockdown: ...