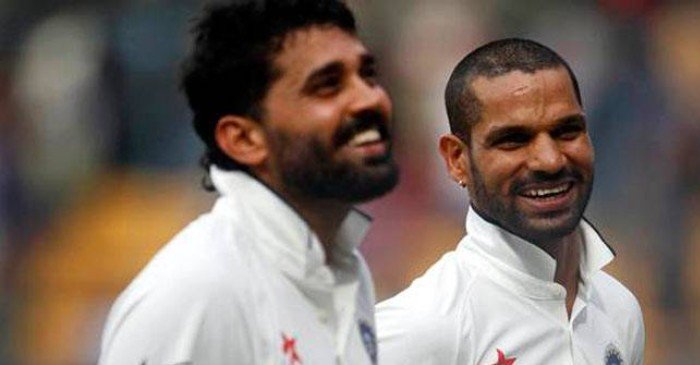 With the successful opening pair of Virender Sehwag and Gautam Gambhir, well past their prime, India had the challenge of finding a new opening pair.

In 2013, after India’s repeated failure at the opening slot, selectors and the team management gave an opportunity to Shikhar Dhawan and Murali Vijay.

In the very first game they played with each other at home in 2013, the duo went on to amass a record of 289 run stand against Australia.

Dhawan made the Aussies chase leather with his blistering knock of 187 while Vijay scored a gritty 153 as India posted 499 in their first innings.

India went on to win the match by six wickets as the Men in Blue finally found a solution to their long-standing opening problems.

Both Dhawan and Vijay went on to become a regular feature in the whites for a substantial period of time, before they went out of favour due to their inconsistency.

Now, Dhawan has opened up to his relationship with Vijay, comparing it to a husband-wife like bond.
“I tell him ‘you’re like my wife’. Sometimes, when we don’t take a run, we have an argument but it gets sorted soon. And it’s very difficult to understand him. You need to have a calm mind and patience to understand him,” Dhawan said during a recent online interaction.

“But he is a lovely chap. I love the opening with him. We have done very well for the country. We are still very good friends. Of course, I look forward to spending time with him and having a good laugh with him,” added the southpaw.

“Sometimes, when he says something, I don’t understand. But after 1-2 years, when I recall what he said, I understand it then,” Dhawan said.

In the end, Dhawan concluded by stating that he could end up being an excellent commentator due to his command in Hindi. Dhawan further added about his passion for playing the flute, and that he is learning the instrument for five years now.