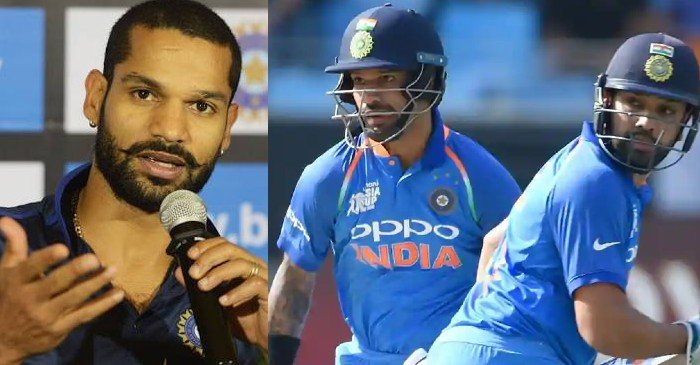 Not so long ago, India vice-captain Rohit Sharma participated in an Instagram live chat session with the Australian opener David Warner where the duo talked about how openers help the other batsmen by playing the new ball and making it a bit old.

During the interesting chat, the style of veteran Indian opening batsman Shikhar Dhawan was also discussed as he is someone who has opened the innings with Rohit in international cricket and Warner in the Indian Premier League (IPL).

In the conversation, Rohit drew attention to the fact that Dhawan never faces the first ball of the match. After which, Warner too revealed a secret and told Rohit that while playing for Sunrisers Hyderabad (SRH) Dhawan would often take a single on the last ball of the over.

Now, after the friendly accusations by Rohit and Warner, Dhawan has responded. While speaking to the former India all-rounder Irfan Pathan during an Instagram Live session, ‘Gabbar’ said he would have a word with Rohit if he’s not comfortable in taking the strike.

“I don’t like taking a strike on the first ball. If my partner is a youngster, I will have a word with him, and if he’s not comfortable to take the strike, I will obviously take it,” said Dhawan.

The Delhi-born left-handed explosive batsman came up with a reason and said that Rohit started opening the innings from 2013, so it became a pattern since then.

“In 2013, it was my comeback game when Rohit started as the opener, I know Rohit took strike as it was a comeback game, so it became a pattern and continued for most of the games,” the 34-year-old added.

Dhawan, on the other hand, straightaway dismissed his former IPL teammate’s claim and said he doesn’t do such things.

“David Warner was saying that I take a single on the last ball of the over, I disagree to that,” Dhawan added further.

Manoj Tiwary opens up on thinking about questioning MS Dhoni regarding the ...