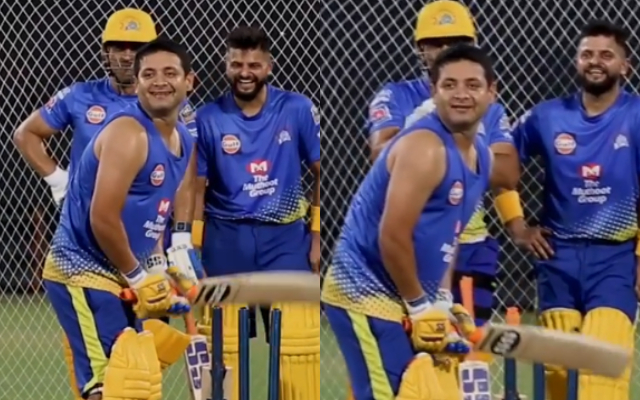 MS Dhoni, the former Indian skipper is a once-in-a-century born talent, who is undoubtedly one of the best finishers of the game. He always motivates his teammates to do their best. Since 2008, while leading CSK in the IPL, he has reaped out lots of success and has steered the franchise to three titles.

The 38-year-old plays an important role in finishing games for CSK. On the field, he often wreaks havoc on the bowlers. On top of that, he also flaunts a funny side as well. And Piyush Chawla, the new recruit of former IPL champions, opened up on one such instance when Dhoni teased him for his slow batting.

In a freewheeling conversation, Piyush Chawla said that Dhoni wanted him to improve his batting. He revealed that during one of CSK’s practise sessions, the veteran cricketer teased him saying that you should go for maximum on every ball.

“When we were batting Mahi bhai was like you are not allowed to defend the ball. You have to hit each and every ball out of the park,” Piyush Chawla revealed during a live chat on CSK’s official Instagram handle. “I can’t hit like you, obviously,” Chawla responded to Dhoni’s advice.

Afterwards, he got an interesting reply from Dhoni, who said that Chawla can score singles easily. But, he will have to go big in the games as it will help the team in winning. “Single toh tu le lega par marna padega,” Dhoni said to Chawla.

After listening to Piyush Chawla, one thing was quite clear that the former World Cup-winner wanted to add another finisher in CSK’s dugout. Chawla was all set to ply his trade for CSK in IPL 2020 as he was bought by Super Kings in the auction at a fee of INR 6.75 Cr. However, BCCI postponed tournament for an indefinite period amid COVID-19 pandemic and there’s still a lot of uncertainty over the commencement of the league.

Here is the clip:

"Mahi bhai said, 'You're not allowed to defend the ball. You've to hit each and every ball out of the park!" recounts PC. What followed next is… #VaanamThottuPonaa! 😍🦁💛