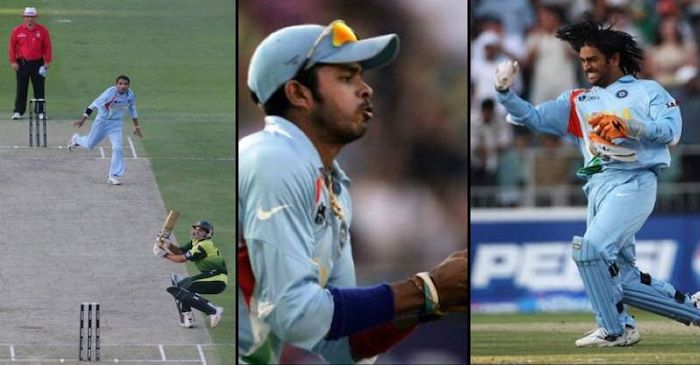 Remember the final tense moments of the 2007 T20 World Cup final when Pakistan’s star batsman Misbah-ul-Haq almost took his side to victory in the last over but how his one mistake changed the result of the match and MS Dhoni-led won the inaugural WT20 title.

On the third ball of the final over, medium pacer Joginder Sharma delivered a slower ball outside the off-stump and Misbah went for a scoop shot over short fine-leg as the ball went straight into the hands of S. Sreesanth.

Recalling Misbah”s wicket in the 2007 T20 World Cup final, Robin Uthappa said that he was not sure of Sreesanth taking the catch at that crucial stage because the latter was known for dropping absolute sitters until then.

“At the beginning of the over, I was at the long-desired I remember Jogi bowling a wide on the first ball and I was like ;man!’ I was praying. Every ball, from 15th over onwards, I was just praying ‘just get us through,” Uthappa said while speaking to BBC’s Doosra Podcast.

“He bowled a wide first ball, and I was like ‘okay, let it not go for a six now. Then he got hit for a six. And I was like, ‘come on, we can still do this’. Even in that situation, Pakistan had all the momentum going their way, I was backing our team,” Uthappa added.

“Misbah hit a scoop shot, and I saw it going pretty high. I noticed that it wasn’t going really far. Then I saw who the fielder at short fine-leg was, and I saw it was Sreesanth. By that point, within the team, he was known for dropping catches, especially the easiest ones. I have seen him drop absolute sitters.”

“As soon As I saw Sreesanth, I started running towards the wickets, and I started praying ‘please God, let him hold on to this one’. If you look at him taking that catch, you can see that when the ball actually entered his hands, he is looking up there (laughs). I know, I still truly believe it was nothing but destiny that won us that World Cup,” the Kerala batsman signed off.

India had defeated their arch-rivals Pakistan by 5 runs to win the inaugural edition of the T20 World Cup. Ane d, most importantly, the victory came after India faced an embarrassing group-stage exit in the 2007 ODI World Cup in the West Indies.