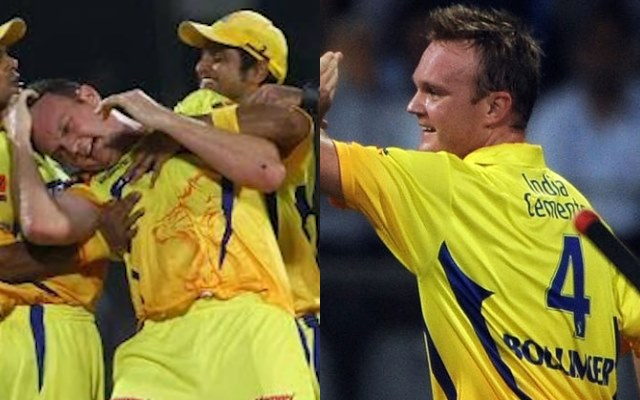 In cricket, a batsman celebrates his half-century or ton with his partner on the field. In the same way, the bowler celebrates his wicket with his teammates. However, sometimes this celebration can turn into an awkward instance and the same happened with Suresh Raina during an IPL match. He threw light over the same during a freewheeling conversation.

Chinna Thala is an important part of Chennai Super Kings. He is quite an active fielder and he is always the first one to run towards the bowler in order to celebrate the joy of dismissing the opponent batsman. It doesn’t matter if he is standing at the boundary line or inside the 30-yard circle, he always looks in electrifying and pro-active mode. But, surprisingly, an incident involving former CSK pacer Doug Bollinger scared Suresh Raina.

During the interaction with Sportscreen, Raina recalled an instance that happened during a match between KKR and CSK in 2010. He said that the match was in a critical stage when Doug Bollinger, the former CSK pacer dismissed Sourav Ganguly, the then Kolkata Knight Riders skipper.

It was a crucial wicket for MS Dhoni-led side as the former left-handed batsman was smashing the bowlers from the word go in that particular season. The 33-year-old added that after the dismissal, he ran towards his teammate Bollinger in order to celebrate it. As per him, he was not aware of the fact that the former Aussie pacer used to wear a hair wig while being on the field. And, unknowingly, he pulled his hair that came off his head.

“I still remember Doug Bollinger incident (He was famous for his hair transplant then). I was actually scared. When he bowled to Dada in a Chennai game in IPL 2010 season, he picked his wicket LBW, I went towards him to celebrate the wicket and while celebrating, I tried to pull his hair off, that’s when the whole thing completely came off,” Raina said.

According to Raina, the Aussie got angry for pulling his wig out in the packed stadium. He cited that after that whole scene, the Indian cricketer used to celebrate his happiness from a certain distance, “Bollinger was like, ‘you can’t touch my hair, you don’t know much effort I put into it’. After that incident, whenever he took a wicket, I used to celebrate by a certain distance with just hand gestures,” he added.

Here is the video: