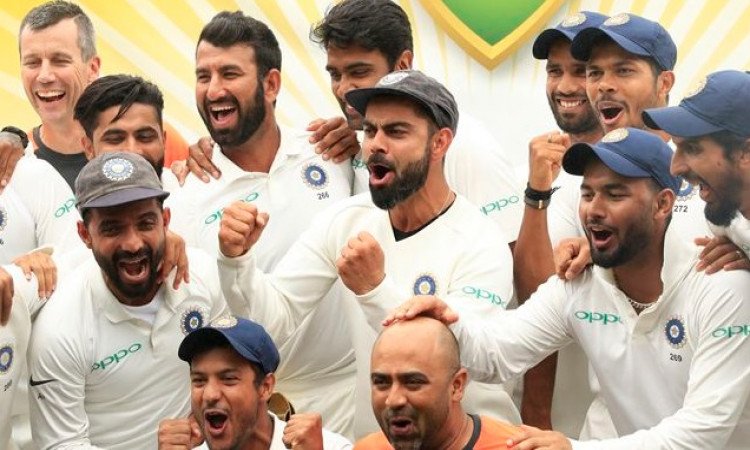 ICC recently confirmed the changes,It included a ban on the usage of saliva to shine the ball and imposed a penalty of five runs to the teams in case of repeated offence. The world cricketing body also introduced COVID-19 like-for-like replacements while non-neutral umpires will be appointed to officiate in the Test matches.

ICC also added an extra unsuccessful review per innings for the teams to cover up for the inexperienced umpires who will officiate. However, another change in playing conditions which many missed was the ICC permitting the front-of-shirt sponsor logos on Test jerseys.

Last year names and numbers were allowed on Test jerseys

It was only last year when the ICC had allowed the teams to sport names and numbers on the players’ jerseys. This move had received mixed reactions as many felt that it would make the longest format exciting. However, few were also of the opinion that the traditional white-ball uniform shouldn’t be tinkered with.

Now, ICC’s current step of allowing the sponsor logos takes the Test jersey further away from its tradition and it remains to be seen if the experts support this decision. But if a report in Fox Sports are to be believed, it has been done for the cricket boards to mitigate the financial losses they have faced due to the Coronavirus.

As far as international cricket is concerned, it is set to return on July 8 with the three-match Test series between England and West Indies. The Jason Holder-led side has arrived in the United Kingdom and has been quarantined for 14 days. The series will be played in a bio-secure bubble and behind closed doors.

All the changes in the playing conditions will be applicable from this series itself even as Pakistan is also likely to travel England for three Tests and as many T20 Internationals in August.