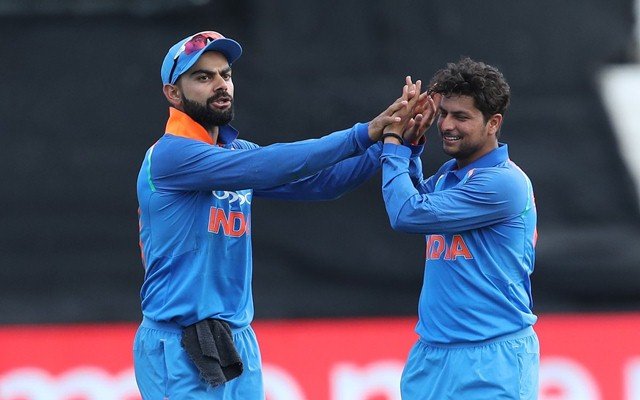 Kuldeep Yadav made his ODI debut after the ICC Champions Trophy 2017. The loss in the final transpired the idea of bringing leg-spinners into the limited-overs set-up, something which India had strayed away from doing.

Virat Kohli, who was named ODI captain only at the beginning of 2017, back two leg-spinners to do the job for him in the ODIs and T20Is. This gave opportunities to Kuldeep and Yuzvendra Chahal to solidify their names in the Indian limited-overs lineup.

In a recent interview, the Uttar Pradesh leggie, Kuldeep has credited Virat for his on-field management of the team. He pointed out that Kohli never fails to encourage young players. He also said that the captain has shown belief in him.

‘When I was new in the team, he backed me a lot’: Kuldeep on Kohli

“If your captain believes in you, giving your best on the field becomes easy. From Virat, we learn a lot of things like how to manage difficult situations. He never fails to motivate young players,” the 25-year-old said, as reported by Hindustan Times.

Talking about his initial days in international cricket, Kuldeep said that captain had backed him a lot. He revealed the two of them share a good ‘tuning’. Kuldeep has been extremely successful in the middle overs. He has picked up regular wickets during the middle stages of the match, something which was the problem with Indian spinners after the 2015 World Cup.

“I remember when I was new in the team he backed me a lot. In fact, now also, he is always there for me. He always appreciates your skills and we have a great tuning together,” he further added.

Under Kohli’s captaincy, Kuldeep has played 51 out of his 60 ODI matches. He has taken 91 wickets in those 51 matches and another 13 wickets, totalling it to 104 ODI wickets. In T20Is, he has picked up 39 wickets from 21 T20Is. In Tests, Kuldeep has 24 scalps from six matches.