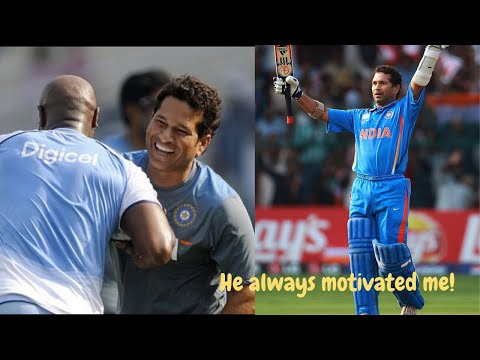 Known as the ‘God of cricket’, Sachin Tendulkar’s aura on the field was second to none. The world was in awe of the ‘Little Master’ and his prolific run-scoring numbers prove his calibre. In 200 Tests and 463 ODIs for India, Tendulkar scored 15921 and 18426 runs respectively.

People bowed down to ‘Litle Master’ during the course of his career and they also shed a tear or two when he bid adieu to the sport.

Tendulkar announced his retirement from ODIs in December 2012. He retired from T20Is in October 2013 and retired from all forms of the game on 16 November 2013, after playing his 200th Test against West Indies at the Wankhede Stadium.

The crowd at Wankhede was in total silence before starting to applaud Tendulkar upon his dismissal in the Test. It was a special and memorable moment for India as well as West Indies squad.

Many West Indies players felt honoured while bowling against Tendulkar in the last Test of his career.

Recalling the experience, West Indies’ Tino Best described it as the most electrifying thing ever in a conversation with Dr Yash Kashikar on his show ‘Say Yash To Sports’. Best also recalled the day when Tendulkar had invited him to his room during the Champions Trophy in 2002.

While Best was completely in awe, he cherished the moment and talked about life and cricket with the ‘Master Blaster’. To top it off, Tendulkar also gave his Champions Trophy India shirt to Best.

“It was the most electrifying thing ever. I loved every minute of it. In fact, the first time I met him was way back in 2002 when India toured WI and I had a chance to have dinner with the Indian team.

Sachin, Dravid, Wasim Jaffer and all other guys motivated me a lot and said keep going Tino, we hear you have got some serious pace. After that during the champions trophy in 2002 (South Africa), Sachin called me in his room…and I was completely in awe..we talked about life & cricket in general,” recalled Best.

“Sachin told me the funniest thing he had seen was when I ran into Freddie Flintoff and bowled at him without the ball..and he always remembered me for it. He also gave me his Champions Trophy India shirt,” he added.

Best, moved by Tendulkar’s kind gesture, expressed his desire back then to bowl to the ‘Little Master’. Tino’s dream finally turned into reality when he got the opportunity to bowl against Tendulkar at Wankhede in his last Test.

Best also remembered the electrifying atmosphere during the Test and said that the crowd was chanting ‘Tino Sucks, Tino sucks’ to notch up the energy. He also revealed that bowling to Tendulkar was the highlight of his career.

“I hugged and thanked him for being so kind and said that I hope to bowl at him someday. Finally, when I got an opportunity to bowl at him in his final test I was like, Legend I am going to give my everything at you. I wanted to pick his wicket for my son but it didn’t happen. But, I remember the Wankhede crowd going “Tino Sucks, Tino sucks”..and I just loved that energy. So for me, that was the highlight of my career,” said Best.

India tour to Zimbabwe called off due ...

India tour to Zimbabwe called off due ...