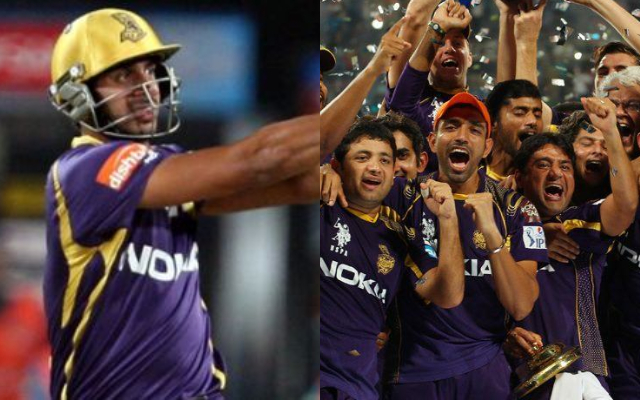 The Kolkata Knight Riders (KKR) struggled to make a mark in the Indian Premier League (IPL) until 2012 when they won the title for the first time. Gautam Gambhir led the side to the glory and it was a total team effort as the KKR defeated the defending champions Chennai Super Kings (CSK). Wednesday marked the eight-year anniversary of the historic win and the franchise, on its social platform, recalled the emotional moment.

It was a memorable season for the franchise with the team ending the league stage at the second position. And when it mattered the most, they chased down 191 against the star-studded CSK to lay their hands on the coveted title. The likes of Gambhir, Jacques Kallis and Brendon McCullum played crucial roles. However, other players like Yusuf Pathan, Manoj Tiwary and Shakib Al Hasan chipped in whenever the team needed.

But while celebrating the eight-year anniversary of the memorable victory, the KKR didn’t tag Tiwary and Shakib and it didn’t go down well with the Bengal cricketer.

Manoj Tiwary recalled those moments stating that it was emotional and will remember the victory forever. However, he didn’t forget to point out that the KKR’s official Twitter handle forgot to tag him and Shakib thereby forgetting their contribution in the victory.

While Shakib had picked 12 wickets in eight matches in the 2012 season, Tiwary had managed to score 260 runs in 15 innings playing the role of a finisher most of the times. He also lashed out at the franchise stating that them forgetting to tag is insulting for both the players.

Yes I, along with others have too many memories, emotions and that will remain forever but after seeing this tweet where u all forgot to mention n tag me and @Sah75official is insulting and this mrng tweet of urs will remain close to every knight Rider’s 💓 #disappointed https://t.co/FF53pqP1pE

The KKR’s Twitter handle was quick to respond to Manoj Tiwary as they shared a picture which proved that they had tagged the cricketer in the tweet.

No way, Manoj 🙂
We would never miss tagging such a special 'knight' to our special night. You were, and always be a hero of that 2012 victory 💜 pic.twitter.com/0D0KgUDeGq

As for the KKR, the memorable journey for the team continued as they won the IPL in the 2014 season as well under Gambhir itself. Since then, the team has been doing well but is yet to win the title for the third time.

Brad Hogg was a piece of piss, hard to understand why other ...