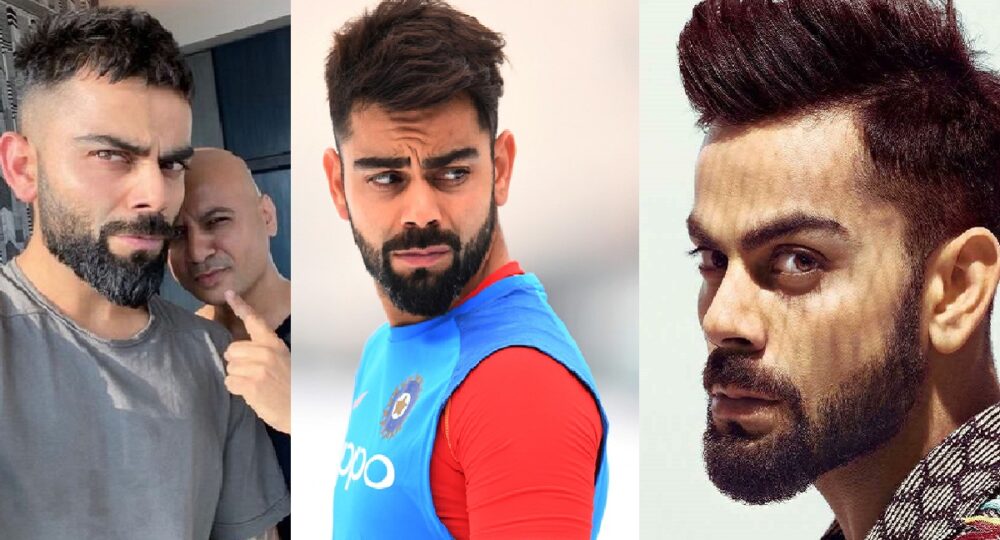 Virat Kohli Hairstyle : Here’s how Kohli’s hairstyle has evolved over the years

Virat Kohli, the King of cricket and captain of Team India is also the fashion icon for the youth. Kohli, who aims for perfection in his game, is equally particular about his look and hairstyle.

Kohli has an enormous social media following because of his brilliant performance on the field and his scintillating style off the field, such as his beard, haircut. Hairstyle is something that Virat changes most often.

So Today, Let’s find out how Virat Kohli’s hairstyle has evolved over the years from year 2008 to 2020

Kohli came to limelight in 2008 when he led the Indian Under-19 side to lift the World Cup. He used to flaunt spikes back at that time

After making his debut for the Indian National team, Virat Kohli adopted a more formal look than before. He got ShortSpike haircut.

Spikes were still part of Kohli’s hairstyle till 2010. Virat Kohli got his debut in National T20 Team after performing well at domestic. He became India’s highest scorer in the year and also started to look comfortable in the mature look.

The year when India won the World Cup 2011. Kohli opted for a personalised cut, A neat look and neat year to go along as he played a crucial knock in the world cup final.

A historic year for him as a batsman, made a brilliant Test century against Australia in AUS, becoming India’s best batsman in the T20 World Cup .

In 2012 he got really stylish naturally textured hair with a very light beard.

Kohlis haircut grabbed much attention. It had three Wolverine-like slits on both side, one of which proceed to his eyebrows.

In cricket, it was another good year for him as his chasing ability helped India as we won the Champions Trophy

This Virat Kohli hairstyle was among the first ones where he was close to a full beard and set a trend keeping such a cool beard. Hairs shredding off some from above his ears

In 2015, With another ICC World Cup on the door Kohli got a new hairstyle & now he kept a really high fade and opted for a “Mohawk” emulating one of his idols, Cristiano Ronaldo.

The best Year for Virat Kohli as a Cricketer, Virat was at his brilliant best in terms of runs and hair too.

Kohli Got his Most Loved hairstyle this year : He kept it a bit natural and messy with his fan-favourite undercut with a full beard.

Virat Continued the trend of Undercut with few variation in it, but this time he kept it well combed and simple. Kohli was appointed as Captain in the longest format of the Cricket.

The undercut was now changed to fade rest everything was same.

Kohli Couldn’t just separate himself from the undercut and after a year-long stint experimenting with fade, he returned back to modern undercut hairstyle.

Well-kept on the top and trimmed on the sides, ultimate look of an aggressive, passionate cricketer who leads his team with an intent of winning.

This hair-cut Looked just perfect on the skipper.

In the last few years, Virat has turned into a master of men’s grooming and looked calm and composed than ever before.

He flaunted a sharp jawline. His fashion choices, too, became more fastidious with time. Virat also admitted to have become more disciplined with his diet and workout.