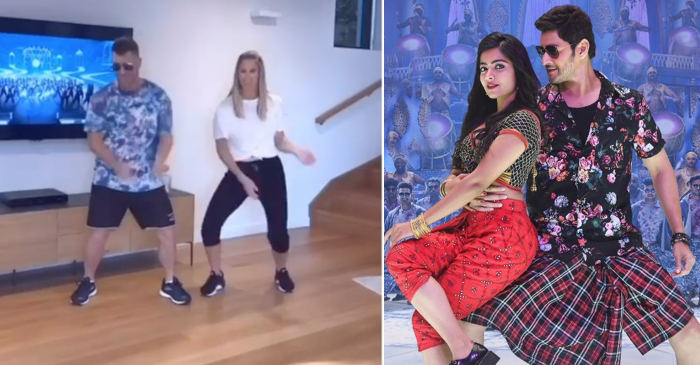 As all the cricketing activities across the globe continue to remain at a standstill due to coronavirus pandemic, Australian opener David Warner is making sure to keep his fans entertained these days. He is constantly sharing pictures and videos of him and his family on social media.

From shaking legs with his daughters on Bollywood popular song ‘Sheila Ki Jawani’ to switching roles with his wife Candice, David has been making the most of this forced break from the game.

On Saturday, the southpaw once again took to his official Twitter handle and shared in new TikTok video of him.

In the video, David and his wife Candice can be seen dancing to the super hit ‘Mind Block’ song from Mahesh Babu and Rashmika Mandanna’s Telugu movie Sarileru Neekevvaru.

The 33-year-old batsman has a massive fan following in India thanks to his association with Sunrisers Hyderabad in the IPL.

Earlier this month, Warner posted a video on Instagram where he was seen lip-syncing to famous Telugu movie dialogue from a 2006 action-thriller ‘Pokiri’ starring Mahesh Babu.

Warner, much like other players across the globe, is spending time at home amid the COVID-19 outbreak.

The left-handed batsman has been quite active on social media, and ever since he joined TikTok, Warner rarely misses out on sharing videos on his Twitter and Instagram accounts.

Warner, while talking to Indian opener Rohit Sharma in an Instagram Live session, also expressed his serious doubts over the future of the T20 World Cup, which is slated to be played in Australia from October 18 to November 15.

“The ICC World Cup will not go ahead here by the looks of it. It will be difficult to get everyone (16 teams) together,” said Warner.

Top 5 highest individual scores by a captain in Test cricket