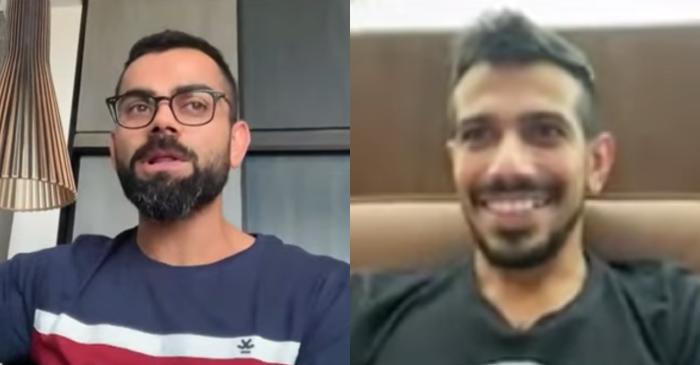 In the video, Kohli can be seen interacting with kids on Star Sports’ show ‘Cricket Connected’. Soon Chahal appeared on the screen, and the duo then had a hilarious conversation on various topics.

Chahal started by saying that a lot has already been disclosed about him, to which Kohli said they have also spoken about Yuzi’s TikTok videos. Kohli then went on to ask in Chahal about his new haircut. When the leggie replies, he took help from his sister, Kohli said: “I think dogs were after you.”

The India captain then called Chahal, as the biggest ‘joker’. At the same time, he also said that pace spearhead Jasprit Bumrah is next for being so open about things on his social media interactions.

“For me, definitely the biggest joker is Chahal. Next is Jasprit (Bumrah). He has been a revelation,” Kohli said in the video.

“I never knew he would talk in detail like this publicly. One on One he does it quite often, but I never thought he would do so openly like this,” he added.

In normal circumstances, Kohli would have been currently leading the Royal Challengers Bangalore (RCB) in the 13th season of the Indian Premier League (IPL), but due to coronavirus pandemic, the tournament has been indefinitely suspended.

What happens when @yuzi_chahal gatecrashes a kids party? 😁😁

Pay-cut for the players will be the last thing to do: BCCI