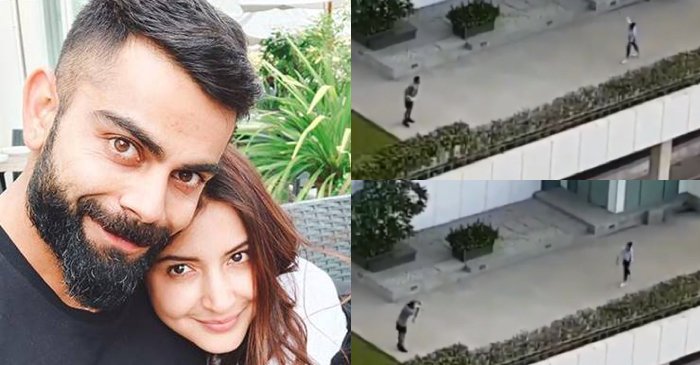 Indian captain Virat Kohli and his actress wife Anushka Sharma were seen playing cricket at their residence. A fan recently posted a video on Twitter where the power couple can be seen enjoying the game.

With cricket action coming to a standstill amid coronavirus outbreak, the cricketers are forced to stay at their homes. However, they have become significantly active on social media and are sharing exciting stories about their career and reflecting on life beyond the sport.

Virat, too, has been conducting Instagram live sessions with fellow cricketers and has been interacting with his fans on social through pictures and videos.

On Saturday, a one-minute long video showed Virat and Anushka playing cricket outside their apartment. Anushka takes the bat first and plays a couple of deliveries – also smacking the ball in the air on one occasion. Virat, however, donned the batting gloves before taking on Anushka.

The Bollywood actress bowled a bouncer first-up, and Virat defended it with a straight bat.

Meanwhile, an isolation camp for players of the Indian cricket team is being planned by the Board of Control for Cricket in India (BCCI) at the National Cricket Academy (NCA) in Bengaluru. But it looks like players like Virat and Rohit Sharma won’t be able to attend it due to the lockdown, as they live in Mumbai.

‘Went to his room to fight with him’: Shoaib Akhtar on a ...