WATCH: When the cameras caught Shahid Afridi tampering with the ball fearlessly 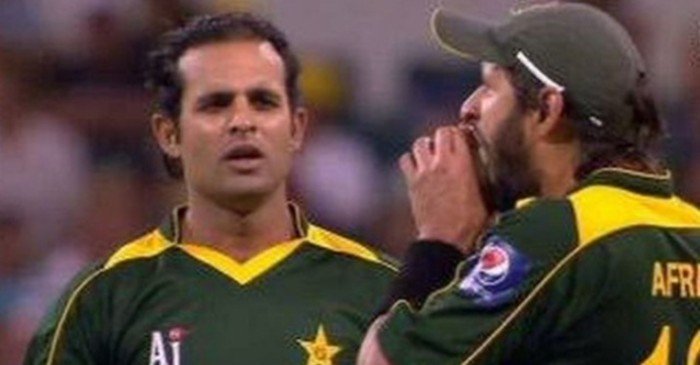 Tampering the cricket ball is a punishable force in the eyes of the International Cricket Council (ICC). Despite the bans and penalties imposed on various international entities, the cricketers have often involved themselves in an unfair practice.

Players such as Faf du Plessis, Michael Atherton, Adam Parore, and even Indian greats Rahul Dravid and Sachin Tendulkar have been probed for tampering with the cricket ball.

They have used foreign objects such as mints, vaselines, and even bottle openers to alter the nature of the ball assisting their bowlers for generating movement.

The cricketing world received a significant jolt, when the live cameras caught Cameron Bancroft using sandpaper on the cricket ball, for which he received a ban along with captain Steve Smith and David Warner, by Cricket Australia (CA).

One of the most notorious cricketers involved in such practices was former Pakistan all-rounder Shahid Afridi. During one of the Test matches between Pakistan and England, back in 2005, Afridi was caught on live television, scruffing up the pitch with his spikes, to help spinners on the is deteriorating pitch.

To which, the former England batsman, Kevin Pietersen objected later. Five years down the line, he repeated his antics in Perth, during the fifth and the final ODI against Australia in 2010, by biting and removing the seam off the ball.

In between overs, broadcasters caught Afridi, without any fear, biting and removing the seam of the ball, and the “handing over” to his bowlers, Mohammad Asif and Rana Naved-ul-Hasan.

However, after stating about trying to smell the ball, he later pleaded guilty for his actions. Afridi also received a two-match ban.

Here’s why the BCCI doesn’t permit Indian players to play in foreign ...